Barriers and facilitators to uptake of systematic reviews by policy makers and health care managers: a scoping review 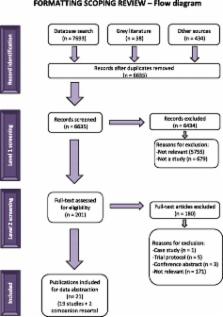 We used the Arksey and O’Malley approach for our scoping review. Electronic databases (e.g., MEDLINE, EMBASE, PsycInfo) were searched from inception until September 2014. Any study that identified barriers or facilitators (including format and content features) to uptake of systematic reviews by health care managers and policy makers/analysts was eligible for inclusion. Two reviewers independently screened the literature results and abstracted data from the relevant studies. The identified barriers and facilitators were charted using a barriers and facilitators taxonomy for implementing clinical practice guidelines by clinicians.

We identified useful information for authors of systematic reviews to inform their preparation of reviews including providing one-page summaries with key messages, tailored to the relevant audience. Moreover, partnerships between researchers and policy makers/managers to facilitate the conduct and use of systematic reviews should be considered to enhance relevance of reviews and thereby influence uptake.

Systematic review authors can consider our results when publishing their systematic reviews. These strategies should be rigorously evaluated to determine impact on use of reviews in decision-making.

The Many Meanings of Research Utilization

D J Cook, C D Mulrow, R B Haynes (1997)
Systematic reviews can help practitioners keep abreast of the medical literature by summarizing large bodies of evidence and helping to explain differences among studies on the same question. A systematic review involves the application of scientific strategies, in ways that limit bias, to the assembly, critical appraisal, and synthesis of all relevant studies that address a specific clinical question. A meta-analysis is a type of systematic review that uses statistical methods to combine and summarize the results of several primary studies. Because the review process itself (like any other type of research) is subject to bias, a useful review requires clear reporting of information obtained using rigorous methods. Used increasingly to inform medical decision making, plan future research agendas, and establish clinical policy, systematic reviews may strengthen the link between best research evidence and optimal health care.

New directions in evidence-based policy research: a critical analysis of the literature

Kathryn Oliver, Theo Lorenc, Simon Innvær (2014)
Despite 40 years of research into evidence-based policy (EBP) and a continued drive from both policymakers and researchers to increase research uptake in policy, barriers to the use of evidence are persistently identified in the literature. However, it is not clear what explains this persistence – whether they represent real factors, or if they are artefacts of approaches used to study EBP. Based on an updated review, this paper analyses this literature to explain persistent barriers and facilitators. We critically describe the literature in terms of its theoretical underpinnings, definitions of ‘evidence’, methods, and underlying assumptions of research in the field, and aim to illuminate the EBP discourse by comparison with approaches from other fields. Much of the research in this area is theoretically naive, focusing primarily on the uptake of research evidence as opposed to evidence defined more broadly, and privileging academics’ research priorities over those of policymakers. Little empirical data analysing the processes or impact of evidence use in policy is available to inform researchers or decision-makers. EBP research often assumes that policymakers do not use evidence and that more evidence – meaning research evidence – use would benefit policymakers and populations. We argue that these assumptions are unsupported, biasing much of EBP research. The agenda of ‘getting evidence into policy’ has side-lined the empirical description and analysis of how research and policy actually interact in vivo. Rather than asking how research evidence can be made more influential, academics should aim to understand what influences and constitutes policy, and produce more critically and theoretically informed studies of decision-making. We question the main assumptions made by EBP researchers, explore the implications of doing so, and propose new directions for EBP research, and health policy.