Selexipag in the treatment of pulmonary arterial hypertension: design, development, and therapy 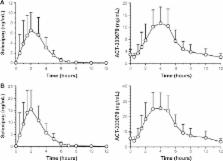 Pulmonary arterial hypertension is characterized by abnormalities in the small pulmonary arteries including increased vasoconstriction, vascular remodeling, proliferation of smooth muscle cells, and in situ thrombosis. Selexipag, a novel, oral prostacyclin receptor agonist, has been shown to improve hemodynamics in a phase II clinical trial and reduce clinical worsening in a large phase III clinical trial involving patients with pulmonary arterial hypertension. In this paper, we describe the prostacyclin signaling pathway, currently available oral prostanoid medications, and the development and clinical use of selexipag.

Initial Use of Ambrisentan plus Tadalafil in Pulmonary Arterial Hypertension.

Nazzareno Galiè,  Joan Barberà,  Adaani Frost … (2015)
Data on the effect of initial combination therapy with ambrisentan and tadalafil on long-term outcomes in patients with pulmonary arterial hypertension are scarce.

Selexipag for the Treatment of Pulmonary Arterial Hypertension.

Olivier Sitbon,  Richard W. Channick,  Kelly Chin … (2015)
In a phase 2 trial, selexipag, an oral selective IP prostacyclin-receptor agonist, was shown to be beneficial in the treatment of pulmonary arterial hypertension.