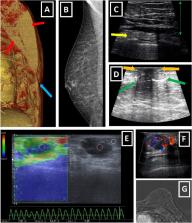 Male breast hosts various pathological conditions just like “female breast.” However, histo-anatomical diversities with female breast lead to many differences regarding the frequency and presentation of diseases, the radiologic appearance of lesions, the diagnostic algorithm, and malignity features.

Radiological modalities may play an important role in evaluating male breast lesions. Although some imaging findings are non-specific, having knowledge of certain imaging characteristics and radiologic patterns is the key to reduce the number of differential diagnoses or to reach an accurate diagnosis.

Male breast imaging is mostly based on physical examination and is required for the complaints of palpable mass, breast enlargement, tenderness, nipple discharge, and nipple-skin changes. The majority of the male breast lumps are benign and the most common reason is gynecomastia. Although it is difficult to exclude malignancy in some cases, gynecomastia often has distinguishable imaging features. Pseudogynecomastia is another differential diagnosis that may be confused with gynecomastia. The distinction is important for the treatment plan.

Apart from gynecomastia, other male breast lesions form a highly heterogeneous group and can be classified based on “Tissue origin,” “Histopathological type and behavior,” and “Radiologic features” for both simplification and comprehensive understanding.

This article mainly focuses on emphasizing the results of basic histo-anatomical differences of male and female breasts, classifying male breast lesions, covering the spectrum of male breast diseases, and assisting radiologists in recognizing the imaging findings, in interpreting them through a holistic approach, in making a differential diagnosis, and in being a part of proper patient management.

Mondor's Disease: A Review of the Literature

Masayuki Amano, Taro Shimizu (2018)
Mondor's disease (MD) is a rare disease that manifests with a palpable cord-like induration on the body surface. In general, MD is a self-limited, benign thrombophlebitis that resolves in four to eight weeks without any specific treatment. Cases of MD can be roughly categorized into three different groups based on the site of the lesion as follows: original MD of the anterolateral thoracoabdominal wall, penile MD with dorsum and dorsolateral aspects of the penis, and axillary web syndrome with mid-upper arm after axillary surgery. The diagnosis of MD is rather straightforward and based on a physical examinations. However, some case occur “secondary” with another underlying disease, including malignancy, a hypercoagulative state, and vasculitis. Therefore, it is critical to identify MD precisely, evaluate any possible underlying disease, and avoid any unnecessary invasive tests or treatment. In this paper, we comprehensively review the clinical characteristics of MD.

Cheri Nguyen, Mark D. Kettler, Michael Swirsky … (2013)
The male breast is susceptible to many of the same pathologic processes as the female breast. Many of these conditions have mammographic, ultrasonographic (US), and magnetic resonance imaging findings that allow differentiation between clearly benign conditions and those that require biopsy. Gynecomastia is the most common abnormality of the male breast and has characteristic imaging features that usually allow differentiation from malignancy. Mammography is the initial imaging modality for a clinically suspicious mass. A palpable mass that is occult or incompletely imaged at mammography mandates targeted US. Suspicious or indeterminate masses require biopsy, which can usually be performed with US guidance. Approximately 0.7% of breast cancers occur in men. Men with breast cancer often present at a more advanced stage than do women owing to a delay in diagnosis. Benign breast neoplasms that may occur in men include angiolipoma, schwannoma, intraductal papilloma, and lipoma. Benign nonneoplastic entities that may occur in the male breast include intramammary lymph node, sebaceous cyst, diabetic mastopathy, hematoma, fat necrosis, subareolar abscess, breast augmentation, venous malformation, secondary syphilis, and nodular fasciitis. Familiarity with the salient features of the classic benign male breast conditions will allow accurate imaging interpretation and avoid unnecessary and often invasive treatment. © RSNA, 2013.

Alec Chau, Neda Jafarian, Marilin Rosa (2016)
Breast cancer is an uncommon disease in men. As a result, the diagnosis may not initially be considered. Understanding the common benign and malignant entities affecting the male breast is critical for timely and accurate diagnosis in the primary care setting. Most patients present with a palpable breast mass or pain. The usual etiology is gynecomastia, the most common breast condition in males, but breast cancer must always be excluded through careful imaging evaluation when physical examination findings are suspicious or inconclusive. Imaging of the male breast generally relies on mammography and ultrasound, with mammography employed as the initial imaging modality of choice and ultrasound when a mass is detected or suspected. Here we describe the normal male breast anatomy and present an evaluation algorithm for the male patient with breast signs or symptoms. The most common benign and malignant entities are described.