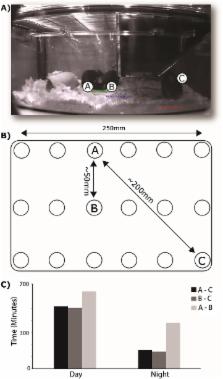 An important factor in reducing variability in mouse test outcomes has been to develop assays that can be used for continuous automated home cage assessment. Our experience has shown that this has been most evidenced in long-term assessment of wheel-running activity in mice. Historically, wheel-running in mice and other rodents have been used as a robust assay to determine, with precision, the inherent period of circadian rhythms in mice. Furthermore, this assay has been instrumental in dissecting the molecular genetic basis of mammalian circadian rhythms. In teasing out the elements of this test that have determined its robustness – automated assessment of an unforced behaviour in the home cage over long time intervals – we and others have been investigating whether similar test apparatus could be used to accurately discriminate differences in distinct behavioural parameters in mice. Firstly, using these systems, we explored behaviours in a number of mouse inbred strains to determine whether we could extract biologically meaningful differences. Secondly, we tested a number of relevant mutant lines to determine how discriminative these parameters were. Our findings show that, when compared to conventional out-of-cage phenotyping, a far deeper understanding of mouse mutant phenotype can be established by monitoring behaviour in the home cage over one or more light:dark cycles.

Jill L. Silverman, Mu Yang, Catherine Lord … (2010)
Autism is a heterogeneous neurodevelopmental disorder of unknown aetiology that affects 1 in 100-150 individuals. Diagnosis is based on three categories of behavioural criteria: abnormal social interactions, communication deficits and repetitive behaviours. Strong evidence for a genetic basis has prompted the development of mouse models with targeted mutations in candidate genes for autism. As the diagnostic criteria for autism are behavioural, phenotyping these mouse models requires behavioural assays with high relevance to each category of the diagnostic symptoms. Behavioural neuroscientists are generating a comprehensive set of assays for social interaction, communication and repetitive behaviours to test hypotheses about the causes of autism. Robust phenotypes in mouse models hold great promise as translational tools for discovering effective treatments for components of autism spectrum disorders.

J Crabbe, D Wahlsten, B C Dudek (1999)
Strains of mice that show characteristic patterns of behavior are critical for research in neurobehavioral genetics. Possible confounding influences of the laboratory environment were studied in several inbred strains and one null mutant by simultaneous testing in three laboratories on a battery of six behaviors. Apparatus, test protocols, and many environmental variables were rigorously equated. Strains differed markedly in all behaviors, and despite standardization, there were systematic differences in behavior across labs. For some tests, the magnitude of genetic differences depended upon the specific testing lab. Thus, experiments characterizing mutants may yield results that are idiosyncratic to a particular laboratory.

Rebecca Carter, Lisa A Lione, Trevor Humby … (1999)
Transgenic mice expressing exon 1 of the human Huntington's disease (HD) gene carrying a 141-157 CAG repeat (line R6/2) develop a progressive neurological phenotype with motor symptoms resembling those seen in HD. We have characterized the motor deficits in R6/2 mice using a battery of behavioral tests selected to measure motor aspects of swimming, fore- and hindlimb coordination, balance, and sensorimotor gating [swimming tank, rotarod, raised beam, fore- and hindpaw footprinting, and acoustic startle/prepulse inhibition (PPI)]. Behavioral testing was performed on female hemizygotic R6/2 transgenic mice (n = 9) and female wild-type littermates (n = 22) between 5 and 14 weeks of age. Transgenic mice did not show an overt behavioral phenotype until around 8 weeks of age. However, as early as 5-6 weeks of age they had significant difficulty swimming, traversing the narrowest square (5 mm) raised beam, and maintaining balance on the rotarod at rotation speeds of 33-44 rpm. Furthermore, they showed significant impairment in prepulse inhibition (an impairment also seen in patients with HD). Between 8 and 15 weeks, R6/2 transgenic mice showed a progressive deterioration in performance on all of the motor tests. Thus R6/2 mice show measurable deficits in motor behavior that begin subtly and increase progressively until death. Our data support the use of R6/2 mice as a model of HD and indicate that they may be useful for evaluating therapeutic strategies for HD, particularly those aimed at reducing the severity of motor symptoms or slowing the course of the disease.