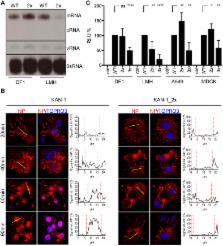 To establish a new lineage in the human population, avian influenza A viruses (AIV) must overcome the intracellular restriction factor MxA. Partial escape from MxA restriction can be achieved when the viral nucleoprotein (NP) acquires the critical human-adaptive amino acid residues 100I/V, 283P, and 313Y. Here, we show that introduction of these three residues into the NP of an avian H5N1 virus renders it genetically unstable, resulting in viruses harboring additional single mutations, including G16D. These substitutions restored genetic stability yet again yielded viruses with varying degrees of attenuation in mammalian and avian cells. Additionally, most of the mutant viruses lost the capacity to escape MxA restriction, with the exception of the G16D virus. We show that MxA escape is linked to attenuation by demonstrating that the three substitutions promoting MxA escape disturbed intracellular trafficking of incoming viral ribonucleoprotein complexes (vRNPs), thereby resulting in impaired nuclear import, and that the additional acquired mutations only partially compensate for this import block. We conclude that for adaptation to the human host, AIV must not only overcome MxA restriction but also an associated block in nuclear vRNP import. This inherent difficulty may partially explain the frequent failure of AIV to become pandemic.

M Hatta (2001)
In 1997, an H5N1 influenza A virus was transmitted from birds to humans in Hong Kong, killing 6 of the 18 people infected. When mice were infected with the human isolates, two virulence groups became apparent. Using reverse genetics, we showed that a mutation at position 627 in the PB2 protein influenced the outcome of infection in mice. Moreover, high cleavability of the hemagglutinin glycoprotein was an essential requirement for lethal infection.

The viral polymerase mediates adaptation of an avian influenza virus to a mammalian host.

B Dauber,  F G Gabriel,  H P Klenk … (2005)
Mammalian influenza viruses are descendants of avian strains that crossed the species barrier and underwent further adaptation. Since 1997 in southeast Asia, H5N1 highly pathogenic avian influenza viruses have been causing severe, even fatal disease in humans. Although no lineages of this subtype have been established until now, such repeated events may initiate a new pandemic. As a model of species transmission, we used the highly pathogenic avian influenza virus SC35 (H7N7), which is low-pathogenic for mice, and its lethal mouse-adapted descendant SC35M. Specific mutations in SC35M polymerase considerably increase its activity in mammalian cells, correlating with high virulence in mice. Some of these mutations are prevalent in chicken and mammalian isolates, especially in the highly pathogenic H5N1 viruses from southeast Asia. These activity-enhancing mutations of the viral polymerase complex demonstrate convergent evolution in nature and, therefore, may be a prerequisite for adaptation to a new host paving the way for new pandemic viruses.

Properties and dissemination of H5N1 viruses isolated during an influenza outbreak in migratory waterfowl in western China.

Zejun Li,  Y. Henry Sun,  Q Qi … (2006)
H5N1 influenza A viruses are widely distributed among poultry in Asia, but until recently, only a limited number of wild birds were affected. During late April through June 2005, an outbreak of H5N1 virus infection occurred among wild birds at Qinghai Lake in China. Here, we describe the features of this outbreak. First identified in bar-headed geese, the disease soon spread to other avian species populating the lake. Sequence analysis of 15 viruses representing six avian species and collected at different times during the outbreak revealed four different H5N1 genotypes. Most of the isolates possessed lysine at position 627 in the PB2 protein, a residue known to be associated with virulence in mice and adaptation to humans. However, neither of the two index viruses possessed this residue. All of the viruses tested were pathogenic in mice, with the exception of one index virus. We also tested the replication of two viruses isolated during the Qinghai Lake outbreak and one unrelated duck H5N1 virus in rhesus macaques. The Qinghai Lake viruses did not replicate efficiently in these animals, producing no evidence of disease other than transient fever, while the duck virus replicated in multiple organs and caused symptoms of respiratory illness. Importantly, H5N1 viruses isolated in Mongolia, Russia, Inner Mongolia, and the Liaoning Province of China after August 2005 were genetically closely related to one of the genotypes isolated during the Qinghai outbreak, suggesting the dominant nature of this genotype and underscoring the need for worldwide intensive surveillance to minimize its devastating consequences.