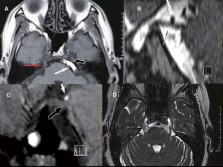 Microvascular decompression (MVD) and MVD combined with partial sensory rhizotomy (PSR) are effective surgical treatments for idiopathic trigeminal neuralgia (TN). The aim of this study was to compare the long-term outcomes of both MVD and MVD+PSR for the treatment of TN and to identify the factors that may influence the long-term outcomes after MVD or MVD+PSR.

From March 2009 to December 2017, 99 patients with idiopathic TN who underwent MVD or MVD+PSR in our hospital (40 MVD, 59 MVD+PSR) were included in the study. The indications for MVD+PSR were as follows: vessels only contacted the nerve root, absence of arterial conflict, or failing to completely decompress from the arteries or veins. All patients were treated by one neurosurgeon and were followed up for at least 1 year. The outcomes were assessed with the Barrow Neurological Institute (BNI) Pain Intensity Scale.

François R. Chapuis,  J Leston,  M Sindou … (2007)
The purpose of this study was to evaluate the long-term efficacy of microvascular decompression (MVD) and to identify the factors affecting outcome in patients treated for primary trigeminal neuralgia (TN). Only the cases with a clear-cut neurovascular conflict (vascular contact and/or compression of the root entry zone of the trigeminal nerve) found at surgery and treated with "pure" MVD (decompression of the root without any additional lesioning or cutting of the adjacent rootlets) were retained. The study included 362 patients who were followed up over a period of 1 to 18 years (median follow-up 7.2 years). A Kaplan-Meier survival analysis was generated at 1 and 15 years of follow-up for all of the considered factors. According to Kaplan-Meier analysis, the success rate (defined as pain-free patients without any medication) was 91% at 1 year and estimated to be 73.38% after 15 years of follow-up. None of the following patient-related factors played any significant role in prognosis: sex, patient age at surgery, history of systemic hypertension, duration of neuralgia before surgery, or history of failed trigeminal surgery. Patients with atypical neuralgia (a baseline of permanent pain) had the same outcome as those with a typical (purely spasmodic) presentation. In addition, the side and topography of the trigeminal nerve did not play a role, whereas involvement of all three divisions of the nerve had a negative effect on outcome. Concerning anatomical factors, neither the type of the compressive vessel nor its location along or around the root was found to be significant. However, the severity of compression was important-the more severe the degree of compression, the better the outcome (p = 0.002). The authors also found that presence of focal arachnoiditis had a negative influence on outcome (p = 0.002). Pure MVD can offer patients affected by a primary TN a 73.38% probability of long-term (15 years) cure of neuralgia. The presence of a clear-cut and marked vascular compression at surgery (and possibly-although not yet reliably--on preoperative magnetic resonance imaging) is the guarantee of a higher than 90% success rate.

No funding was received for this research.