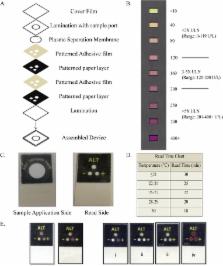 A paper-based, multiplexed, microfluidic assay has been developed to visually measure alanine aminotransferase (ALT) in a fingerstick sample, generating rapid, semi-quantitative results. Prior studies indicated a need for improved accuracy; the device was subsequently optimized using an FDA-approved automated platform (Abaxis Piccolo Xpress) as a comparator. Here, we evaluated the performance of the optimized paper test for measurement of ALT in fingerstick blood and serum, as compared to Abaxis and Roche/Hitachi platforms. To evaluate feasibility of remote results interpretation, we also compared reading cell phone camera images of completed tests to reading the device in real time.

For serum, there was excellent agreement between paper test and Abaxis results, with negligible bias (+4.5 U/L). Abaxis results were systematically 8.6% lower than Roche/Hitachi results. ALT values in fingerstick samples tested on paper were systematically lower than values in paired serum tested on paper (bias -23.6 U/L) or Abaxis (bias -18.4 U/L); a correction factor was developed for the paper device to match fingerstick blood to serum. Visual reads of cell phone images closely matched reads made in real time (bias +5.5 U/L).

The paper ALT test is highly accurate for serum testing, matching the reference method against which it was optimized better than the reference methods matched each other. A systematic difference exists between ALT values in fingerstick and paired serum samples, and can be addressed by application of a correction factor to fingerstick values. Remote reading of this device is feasible.

Elliot Bland,  Michael Altman (1999)
Agreement between two methods of clinical measurement can be quantified using the differences between observations made using the two methods on the same subjects. The 95% limits of agreement, estimated by mean difference +/- 1.96 standard deviation of the differences, provide an interval within which 95% of differences between measurements by the two methods are expected to lie. We describe how graphical methods can be used to investigate the assumptions of the method and we also give confidence intervals. We extend the basic approach to data where there is a relationship between difference and magnitude, both with a simple logarithmic transformation approach and a new, more general, regression approach. We discuss the importance of the repeatability of each method separately and compare an estimate of this to the limits of agreement. We extend the limits of agreement approach to data with repeated measurements, proposing new estimates for equal numbers of replicates by each method on each subject, for unequal numbers of replicates, and for replicated data collected in pairs, where the underlying value of the quantity being measured is changing. Finally, we describe a nonparametric approach to comparing methods.

George Whitesides,  Matthew Martinez,  Brett T. Phillips … (2010)
Microfluidic paper-based analytical devices (microPADs) are a new class of point-of-care diagnostic devices that are inexpensive, easy to use, and designed specifically for use in developing countries. (To listen to a podcast about this feature, please go to the Analytical Chemistry multimedia page at pubs.acs.org/page/ancham/audio/index.html.).

Patterned paper as a platform for inexpensive, low-volume, portable bioassays.

This work was supported by a CIMIT (Center for Integration of Medicine and Innovative Technology) Young Investigator Award (to Nira Pollock). Diagnostics For All provided all kits for the study and participated in study execution, analysis, and write-up.