Analysis of the Nucleophilic Solvation Effects in Isopropyl Chlorothioformate Solvolysis 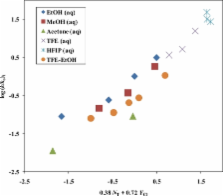 Correlation of the solvent effects through application of the extended Grunwald-Winstein equation to the solvolysis of isopropyl chlorothioformate results in a sensitivity value of 0.38 towards changes in solvent nucleophilicity ( l) and a sensitivity value of 0.72 towards changes in solvent ionizing power ( m). This tangible l value coupled with the negative entropies of activation observed indicates a favorable predisposition towards a modest rear-side nucleophilic solvation of a developing carbocation. Only in 100% ethanol was the bimolecular pathway dominant. These observations are very different from those obtained for the solvolysis of isopropyl chloroformate, where dual reaction channels were proposed, with the addition-elimination reaction favored in the more nucleophilic solvents and a unimolecular fragmentation-ionization mechanism favored in the highly ionizing solvents.

Structural effects on the solvolytic reactivity of carboxylic and sulfonic acid chlorides. Comparisons with gas-phase data for cation formation.

T. Bentley (2008)
Kinetic data for solvolyses of 28 acid chlorides in 97% w/w trifluoroethanol (TFE)-water spanning over 10 (9) in rate constant at 25 degrees C are obtained directly or by short extrapolation from published values. G3 calculations of the energy required for cation formation in the gas phase are validated from proton affinities and from other experimental data. G3 calculations of heterolytic bond dissociation enthalpies (HBDEs) for formation of cations from acid chlorides in the gas phase show the following trends when compared with the solvolysis rate constants: (i) electron-rich sulfonyl chlorides and most carboxylic acid chlorides, including thione derivatives, give a satisfactory linear correlation with a significant negative slope; (ii) most sulfonyl chlorides and some chloroformates and thio derivatives have higher HBDEs and fit another correlation with a small, negative slope. A significant deviation is observed for the acyl series (RCOCl), for which both solvolysis rates and HBDEs increase in the order R = Bu ( t ) < Pr ( i ) < Et < Me. The deviation may be explained either by a prior hydration mechanism or preferably by electrostatic effects on the formation of small cations. The above results of structural effects support independent evidence from solvent effects that cationic ionization reaction pathways (with nucleophilic solvent assistance or S N2 character) are involved in the solvolyses of acid chlorides.

Kinetics and Mechanisms of Reactions of Thiol, Thiono, and Dithio Analogues of Carboxylic Esters with Nucleophiles.

Mechanisms of solvolyses of acid chlorides and chloroformates. Chloroacetyl and phenylacetyl chloride as similarity models.

David C H Harris,  D Sung,  Zoon Ryu … (2005)
[reaction: see text] Rate constants and product selectivities (S = ([ester product]/[acid product]) x ([water]/[alcohol solvent]) are reported for solvolyses of chloroacetyl chloride (3) at -10 degrees C and phenylacetyl chloride (4) at 0 degrees C in ethanol/ and methanol/water mixtures. Additional kinetic data are reported for solvolyses in acetone/water, 2,2,2-trifluoroethanol(TFE)/water, and TFE/ethanol mixtures. Selectivities and solvent effects for 3, including the kinetic solvent isotope effect (KSIE) of 2.18 for methanol, are similar to those for solvolyses of p-nitrobenzoyl chloride (1, Z = NO(2)); rate constants in acetone/water are consistent with a third-order mechanism, and rates and products in ethanol/ and methanol/water mixtures can be explained quantitatively by competing third-order mechanisms in which one molecule of solvent (alcohol or water) acts as a nucleophile and another acts as a general base (an addition/elimination reaction channel). Selectivities increase for 3 as water is added to alcohol. Solvent effects on rate constants for solvolyses of 3 are very similar to those of methyl chloroformate, but acetyl chloride shows a lower KSIE, and a higher sensitivity to solvent-ionizing power, explained by a change to an S(N)2/S(N)1 (ionization) reaction channel. Solvolyses of 4 undergo a change from the addition/elimination channel in ethanol to the ionization channel in aqueous ethanol (<80% v/v alcohol). The reasons for change in reaction channels are discussed in terms of the gas-phase stabilities of acylium ions, calculated using Gaussian 03 (HF/6-31G(d), B3LYP/6-31G(d), and B3LYP/6-311G(d,p) MO theory).