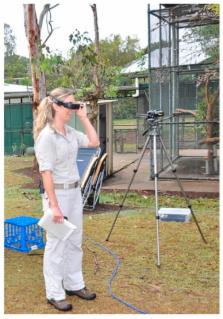 Surveying threatened and invasive species to obtain accurate population estimates is an important but challenging task that requires a considerable investment in time and resources. Estimates using existing ground-based monitoring techniques, such as camera traps and surveys performed on foot, are known to be resource intensive, potentially inaccurate and imprecise, and difficult to validate. Recent developments in unmanned aerial vehicles (UAV), artificial intelligence and miniaturized thermal imaging systems represent a new opportunity for wildlife experts to inexpensively survey relatively large areas. The system presented in this paper includes thermal image acquisition as well as a video processing pipeline to perform object detection, classification and tracking of wildlife in forest or open areas. The system is tested on thermal video data from ground based and test flight footage, and is found to be able to detect all the target wildlife located in the surveyed area. The system is flexible in that the user can readily define the types of objects to classify and the object characteristics that should be considered during classification.

The Covid-19 Lessons: How Telemedicine Helps

Amanda Hodgson,  Natalie Kelly,  David Peel (2013)
Aerial surveys of marine mammals are routinely conducted to assess and monitor species’ habitat use and population status. In Australia, dugongs (Dugong dugon) are regularly surveyed and long-term datasets have formed the basis for defining habitat of high conservation value and risk assessments of human impacts. Unmanned aerial vehicles (UAVs) may facilitate more accurate, human-risk free, and cheaper aerial surveys. We undertook the first Australian UAV survey trial in Shark Bay, western Australia. We conducted seven flights of the ScanEagle UAV, mounted with a digital SLR camera payload. During each flight, ten transects covering a 1.3 km2 area frequently used by dugongs, were flown at 500, 750 and 1000 ft. Image (photograph) capture was controlled via the Ground Control Station and the capture rate was scheduled to achieve a prescribed 10% overlap between images along transect lines. Images were manually reviewed post hoc for animals and scored according to sun glitter, Beaufort Sea state and turbidity. We captured 6243 images, 627 containing dugongs. We also identified whales, dolphins, turtles and a range of other fauna. Of all possible dugong sightings, 95% (CI = 90%, 98%) were subjectively classed as ‘certain’ (unmistakably dugongs). Neither our dugong sighting rate, nor our ability to identify dugongs with certainty, were affected by UAV altitude. Turbidity was the only environmental variable significantly affecting the dugong sighting rate. Our results suggest that UAV systems may not be limited by sea state conditions in the same manner as sightings from manned surveys. The overlap between images proved valuable for detecting animals that were masked by sun glitter in the corners of images, and identifying animals initially captured at awkward body angles. This initial trial of a basic camera system has successfully demonstrated that the ScanEagle UAV has great potential as a tool for marine mammal aerial surveys.

Are unmanned aircraft systems (UASs) the future of wildlife monitoring? A review of accomplishments and challenges