Epileptic Encephalopathies in Adults and Childhood 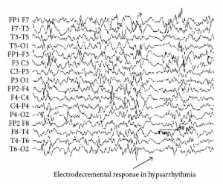 Epileptic encephalopathies are motor-mental retardations or cognitive disorders secondary to epileptic seizures or epileptiform activities. Encephalopaties due to brain damage, medications, or systemic diseases are generally not in the scope of this definition, but they may rarely accompany the condition. Appropriate differential diagnosis of epileptic seizures as well as subclinical electroencephalographic discharges are crucial for management of seizures and epileptiform discharges and relative regression of cognitive deterioration in long-term followup. Proper antiepileptic drug, hormonal treatment, or i.v. immunoglobulin choice play major role in prognosis. In this paper, we evaluated the current treatment approaches by reviewing clinical electrophysiological characteristics of epileptic encephalopathies.

A proposed diagnostic scheme for people with epileptic seizures and with epilepsy: report of the ILAE Task Force on Classification and Terminology.

Proposal for revised classification of epilepsies and epileptic syndromes. Commission on Classification and Terminology of the International League Against Epilepsy.

Hirotomo Saitsu,  Akira Nishimura,  Naomichi Matsumoto … (2008)
Early infantile epileptic encephalopathy with suppression-burst (EIEE), also known as Ohtahara syndrome, is one of the most severe and earliest forms of epilepsy. Using array-based comparative genomic hybridization, we found a de novo 2.0-Mb microdeletion at 9q33.3-q34.11 in a girl with EIEE. Mutation analysis of candidate genes mapped to the deletion revealed that four unrelated individuals with EIEE had heterozygous missense mutations in the gene encoding syntaxin binding protein 1 (STXBP1). STXBP1 (also known as MUNC18-1) is an evolutionally conserved neuronal Sec1/Munc-18 (SM) protein that is essential in synaptic vesicle release in several species. Circular dichroism melting experiments revealed that a mutant form of the protein was significantly thermolabile compared to wild type. Furthermore, binding of the mutant protein to syntaxin was impaired. These findings suggest that haploinsufficiency of STXBP1 causes EIEE.