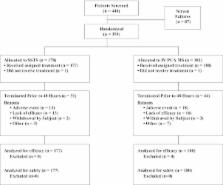 This was a randomized, open-label, 48-hour non-inferiority study with optional extension to 72 hours at 26 U.S. sites enrolling patients scheduled for elective major open abdominal or orthopedic (hip or knee replacement) surgery. The primary outcome measure was the proportion of patients who responded “good” or “excellent” (collectively “success”) at the 48-hour timepoint on the Patient Global Assessment of method of pain control (PGA48).

A total of 357 patients received study drug and 78.5% vs. 65.6% of patients achieved PGA48 “success” for SSTS vs. IV PCA MS, respectively, demonstrating non-inferiority ( P < 0.001 using the one-side Z-test against the non-inferiority margin) as well as statistical superiority for treatment effect ( P = 0.007). Patients using SSTS reported more rapid onset of analgesia and patient and nurse ease of care and satisfaction scores were higher than IV PCA MS. Adverse events were similar between the 2 groups; however, SSTS had fewer patients experiencing oxygen desaturations below 95% compared to IV PCA MS ( P = 0.028).

Sufentanil sublingual tablet system is a promising new analgesic technology that may address some of the concerns with IV PCA.

Validation of a verbally administered numerical rating scale of acute pain for use in the emergency department.

Matthew T Latimer,  E. Gallagher,  Polly Bijur (2003)
Verbally administered numerical rating scales (NRSs) from 0 to 10 are often used to measure pain, but they have not been validated in the emergency department (ED) setting. The authors wished to assess the comparability of the NRS and visual analog scale (VAS) as measures of acute pain, and to identify the minimum clinically significant difference in pain that could be detected on the NRS. This was a prospective cohort study of a convenience sample of adults presenting with acute pain to an urban ED. Patients verbally rated pain intensity as an integer from 0 to 10 (0 = no pain, 10 = worst possible pain), and marked a 10-cm horizontal VAS bounded by these descriptors. VAS and NRS data were obtained at presentation, 30 minutes later, and 60 minutes later. At 30 and 60 minutes, patients were asked whether their pain was "much less," "a little less," "about the same," "a little more," or "much more." Differences between consecutive pairs of measurements on the VAS and NRS obtained at 30-minute intervals were calculated for each of the five categories of pain descriptor. The association between VAS and NRS scores was expressed as a correlation coefficient. The VAS scores were regressed on the NRS scores in order to assess the equivalence of the measures. The mean changes associated with descriptors "a little less" or "a little more" were combined to define the minimum clinically significant difference in pain measured on the VAS and NRS. Of 108 patients entered, 103 provided data at 30 minutes and 86 at 60 minutes. NRS scores were strongly correlated to VAS scores at all time periods (r = 0.94, 95% CI = 0.93 to 0.95). The slope of the regression line was 1.01 (95% CI = 0.97 to 1.06) and the y-intercept was -0.34 (95% CI = -0.67 to -0.01). The minimum clinically significant difference in pain was 1.3 (95% CI = 1.0 to 1.5) on the NRS and 1.4 (95% CI = 1.1 to 1.7) on the VAS. The findings suggest that the verbally administered NRS can be substituted for the VAS in acute pain measurement.

The changing demographics of total joint arthroplasty recipients in the United States and Ontario from 2001 to 2007.

Elena Losina,  G. Hawker,  William Reichmann … (2012)
The rates of total joint arthroplasty (TJA) of the hip and knee have increased in North America over the last decade. While initially designed for elderly patients (>70 years of age), several reports suggest that an increasing number of younger patients are undergoing joint replacements. This suggests that more people are meeting the indication for TJA earlier in their lives. Alternatively, it might indicate a broadening of the indications for TJA. We used the administrative databases available at the Healthcare Cost and Utilization Project (HCUP) and the Institute for Clinical Evaluative Sciences (ICES) to determine the rates of TJA of the hip and knee in the United States, and Ontario, Canada, respectively. We determined the crude rates of THA and TKA in both areas for four calendar years (2001, 2003, 2005 and 2007). We also calculated the age- and sex-standardised rates of THA and TKA in both areas for each time period. We compared the age distribution of TJA recipients between the US and Ontario, and within each area over time. The crude and standardised rates of THA and TKA increased over time in both the US and Ontario. The crude rates of THA were higher in the US in 2001 and 2003, but were not significantly different from the rate in Ontario in 2005 and 2007. The crude rates of TKA were consistently higher in the US for all time periods. In addition, the US consistently had more THA and TKA recipients in 'younger' age categories (<60 years of age). While the age- and sex-standardised rates of TKA were greater in the US in all time periods, the relative increase in rates from 2001 to 2007 was greater in Ontario (US - 59%, Ontario - 73%). For both the US and Ontario, there was a significant shift in the demographic of THA and TKA recipients to younger patients (p < 0.0001). The utilisation of primary hip and knee arthroplasty has increased substantially in both the US and Ontario in the period from 2001 to 2007. This increase has been predominantly in knee replacements. The demographics of joint replacement recipients has become younger, with substantial increases in the prevalence of patients <60 years old amongst TJA recipients, and significant increases in the incidence of TJA in these age groups in the general population, in both the US and Ontario. Copyright © 2012 Elsevier Ltd. All rights reserved.

Paul Carr,  Ben Quah,  E D McNicol … (2005)
Patients may control postoperative pain by self-administration of intravenous opioids using devices designed for this purpose (patient controlled analgesia or PCA). A 1992 meta-analysis by Ballantyne found a strong patient preference for PCA over conventional analgesia but disclosed no differences in analgesic consumption or length of postoperative hospital stay. Although Ballantyne's meta-analysis found that PCA did have a small but statistically significant benefit upon pain intensity, Walder's review in 2001 did not find a significant differences in pain intensity and pain relief between PCA and conventionally treated groups. To evaluate the efficacy of PCA versus conventional analgesia (such as a nurse administering an analgesic upon a patient's request) for postoperative pain control. Randomized controlled trials (RCTs) were identified from the Cochrane Central Register of Controlled Trials (CENTRAL) (The Cochrane Library 2004, Issue 3), MEDLINE (1966 to 2004), and EMBASE (1994 to 2004). Additional reports were identified from the reference lists of retrieved papers. RCTs of PCA versus conventional analgesia that employed pain intensity as a primary or secondary outcome were selected. These trials included RCTs that compared PCA without a continuous background infusion versus conventional parenteral analgesic regimens. Studies that explicitly stated they involved patients with chronic pain were excluded. Trials were scored using the Oxford Quality Scale. Meta-analyses were performed of outcomes that included analgesic efficacy assessed by a Visual Analog Scale (VAS), analgesic consumption, patient satisfaction, length of stay and adverse effects. A sufficient number of the retrieved trials reported these parameters to permit meta-analyses. Fifty-five studies with 2023 patients receiving PCA and 1838 patients assigned to a control group met inclusion criteria. PCA provided better pain control and greater patient satisfaction than conventional parenteral 'as-needed' analgesia. Patients using PCA consumed higher amounts of opioids than the controls and had a higher incidence of pruritus (itching) but had a similar incidence of other adverse effects. There was no difference in the length of hospital stay. This review provides evidence that PCA is an efficacious alternative to conventional systemic analgesia for postoperative pain control.