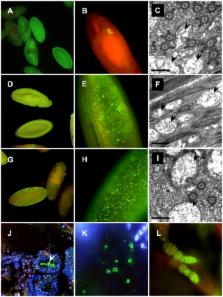 The neotropical Drosophila paulistorum superspecies, consisting of at least six geographically overlapping but reproductively isolated semispecies, has been the object of extensive research since at least 1955, when it was initially trapped mid-evolution in flagrant statu nascendi. In this classic system females express strong premating isolation patterns against mates belonging to any other semispecies, and yet uncharacterized microbial reproductive tract symbionts were described triggering hybrid inviability and male sterility. Based on theoretical models and limited experimental data, prime candidates fostering symbiont-driven speciation in arthropods are intracellular bacteria belonging to the genus Wolbachia. They are maternally inherited symbionts of many arthropods capable of manipulating host reproductive biology for their own benefits. However, it is an ongoing debate as to whether or not reproductive symbionts are capable of driving host speciation in nature and if so, to what extent. Here we have reevaluated this classic case of infectious speciation by means of present day molecular approaches and artificial symbiont depletion experiments. We have isolated the α-proteobacteria Wolbachia as the maternally transmitted core endosymbionts of all D. paulistorum semispecies that have coevolved towards obligate mutualism with their respective native hosts. In hybrids, however, these mutualists transform into pathogens by overreplication causing embryonic inviability and male sterility. We show that experimental reduction in native Wolbachia titer causes alterations in sex ratio, fecundity, and mate discrimination. Our results indicate that formerly designated Mycoplasma-like organisms are most likely Wolbachia that have evolved by becoming essential mutualistic symbionts in their respective natural hosts; they have the potential to trigger pre- and postmating isolation. Furthermore, in light of our new findings, we revisit the concept of infectious speciation and discuss potential mechanisms that can restrict or promote symbiont-induced speciation at post- and prezygotic levels in nature and under artificial laboratory conditions.

The Drosophila paulistorum species complex serves as a well-studied model system for evaluating the impact of symbiosis on host speciation since they evolve rapidly and comprise an ancestral, but highly dynamic, reservoir of microbial symbionts. Theory and some experimental evidence suggest that in evolutionary longterm host-symbiont interactions, reproductive parasites might evolve a more benign lifestyle towards mutualism, manipulate sexual mating behavior, and foster host speciation. However, it is an ongoing debate as to whether or not microbial symbionts are capable of driving host speciation in nature and if so, to what extent. Prime candidates are Wolbachia, inherited, endosymbiotic bacteria of many arthropods, presently attracting attention as potential biocontrol agents since they affect host reproductive biology. Here we document that all D. paulistorum semispecies harbor Wolbachia that provide significant fitness benefits to their natural hosts. In semispecies hybrids, however, mutualistic Wolbachia turn into pathogens, triggering embryonic lethality and male sterility via overreplication. Besides their impacts on post-mating isolation, we show that in their native D. paulistorum hosts Wolbachia manipulate sexual behavior by triggering pre-mating isolation via selective mate avoidance, i.e. avoiding mates harboring another, incompatible symbiont variant. Our study reveals that endosymbionts can coevolve rapidly with their native hosts and play a significant role in driving natural host speciation.

Wolbachia as a bacteriocyte-associated nutritional mutualist.

Takahiro Hosokawa,  Ryuichi Koga,  Yoshitomo Kikuchi … (2010)
Many insects are dependent on bacterial symbionts that provide essential nutrients (ex. aphid-Buchnera and tsetse-Wiglesworthia associations), wherein the symbionts are harbored in specific cells called bacteriocytes that constitute a symbiotic organ bacteriome. Facultative and parasitic bacterial symbionts like Wolbachia have been regarded as evolutionarily distinct from such obligate nutritional mutualists. However, we discovered that, in the bedbug Cimex lectularius, Wolbachia resides in a bacteriome and appears to be an obligate nutritional mutualist. Two bacterial symbionts, a Wolbachia strain and an unnamed gamma-proteobacterium, were identified from different strains of the bedbug. The Wolbachia symbiont was detected from all of the insects examined whereas the gamma-proteobacterium was found in a part of them. The Wolbachia symbiont was specifically localized in the bacteriomes and vertically transmitted via the somatic stem cell niche of germalia to oocytes, infecting the incipient symbiotic organ at an early stage of the embryogenesis. Elimination of the Wolbachia symbiont resulted in retarded growth and sterility of the host insect. These deficiencies were rescued by oral supplementation of B vitamins, confirming the essential nutritional role of the symbiont for the host. The estimated genome size of the Wolbachia symbiont was around 1.3 Mb, which was almost equivalent to the genome sizes of parasitic Wolbachia strains of other insects. These results indicate that bacteriocyte-associated nutritional mutualism can evolve from facultative and prevalent microbial associates like Wolbachia, highlighting a previously unknown aspect of the parasitism-mutualism evolutionary continuum.

Lynn Dover (1982)
It is generally accepted that mutations may become fixed in a population by natural selection and genetic drift. In the case of many families of genes and noncoding sequences, however, fixation of mutations within a population may proceed as a consequence of molecular mechanisms of turnover within the genome. These mechanisms can be both random and directional in activity. There are circumstances in which the unusual concerted pattern of fixation permits the establishment of biological novelty and species discontinuities in a manner not predicted by the classical genetics of natural selection and genetic drift.

Ellen Decaestecker,  Sabrina Gaba,  Joost A M Raeymaekers … (2007)
Antagonistic interactions between hosts and parasites are a key structuring force in natural populations, driving coevolution. However, direct empirical evidence of long-term host-parasite coevolution, in particular 'Red Queen' dynamics--in which antagonistic biotic interactions such as host-parasite interactions can lead to reciprocal evolutionary dynamics--is rare, and current data, although consistent with theories of antagonistic coevolution, do not reveal the temporal dynamics of the process. Dormant stages of both the water flea Daphnia and its microparasites are conserved in lake sediments, providing an archive of past gene pools. Here we use this fact to reconstruct rapid coevolutionary dynamics in a natural setting and show that the parasite rapidly adapts to its host over a period of only a few years. A coevolutionary model based on negative frequency-dependent selection, and designed to mimic essential aspects of our host-parasite system, corroborated these experimental results. In line with the idea of continuing host-parasite coevolution, temporal variation in parasite infectivity changed little over time. In contrast, from the moment the parasite was first found in the sediments, we observed a steady increase in virulence over time, associated with higher fitness of the parasite.

Publisher ID: 09-PLPA-RA-2034R3
DOI: 10.1371/journal.ppat.1001214
PMC ID: 2996333
PubMed ID: 21151959
Copyright statement: Miller et al. This is an open-access article distributed under the terms of the Creative Commons Attribution License, which permits unrestricted use, distribution, and reproduction in any medium, provided the original author and source are credited.