Membrane trafficking in osteoclasts and implications for osteoporosis 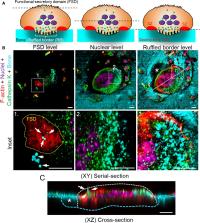 Osteoclasts are large multinucleated cells exquisitely adapted to resorb bone matrix. Like other eukaryotes, osteoclasts possess an elaborate ensemble of intracellular organelles through which solutes, proteins and other macromolecules are trafficked to their target destinations via membrane-bound intermediaries. During bone resorption, membrane trafficking must be tightly regulated to sustain the structural and functional polarity of the osteoclasts’ membrane domains. Of these, the ruffled border (RB) is most characteristic, functioning as the osteoclasts' secretory apparatus. This highly convoluted organelle is classically considered to be formed by the targeted fusion of acidic vesicles with the bone-facing plasma membrane. Emerging findings disclose new evidence that the RB is far more complex than previously envisaged, possessing discrete subdomains that are serviced by several intersecting endocytic, secretory, transcytotic and autophagic pathways. Bone-resorbing osteoclasts therefore serve as a unique model system for studying polarized membrane trafficking. Recent advances in high-resolution microscopy together with the convergence of genetic and cell biological studies in humans and in mice have helped illuminate the major membrane trafficking pathways in osteoclasts and unmask the core molecular machinery that governs these distinct vesicle transport routes. Among these, small Rab GTPases, their binding partners and members of the endocytic sorting nexin family have emerged as critical regulators. This mini review summarizes our current understanding of membrane trafficking in osteoclasts, the key molecular participants, and discusses how these transport machinery may be exploited for the development of new therapies for metabolic disorders of bone-like osteoporosis.

Anna Villa,  Ansgar Schulz,  Miep H. Helfrich … (2013)
Osteopetrosis is a genetic condition of increased bone mass, which is caused by defects in osteoclast formation and function. Both autosomal recessive and autosomal dominant forms exist, but this Review focuses on autosomal recessive osteopetrosis (ARO), also known as malignant infantile osteopetrosis. The genetic basis of this disease is now largely uncovered: mutations in TCIRG1, CLCN7, OSTM1, SNX10 and PLEKHM1 lead to osteoclast-rich ARO (in which osteoclasts are abundant but have severely impaired resorptive function), whereas mutations in TNFSF11 and TNFRSF11A lead to osteoclast-poor ARO. In osteoclast-rich ARO, impaired endosomal and lysosomal vesicle trafficking results in defective osteoclast ruffled-border formation and, hence, the inability to resorb bone and mineralized cartilage. ARO presents soon after birth and can be fatal if left untreated. However, the disease is heterogeneous in clinical presentation and often misdiagnosed. This article describes the genetics of ARO and discusses the diagnostic role of next-generation sequencing methods. The management of affected patients, including guidelines for the indication of haematopoietic stem cell transplantation (which can provide a cure for many types of ARO), are outlined. Finally, novel treatments, including preclinical data on in utero stem cell treatment, RANKL replacement therapy and denosumab therapy for hypercalcaemia are also discussed.

David Russell,  Steven Luckman,  F Coxon … (1998)
Bisphosphonates are currently the most important class of antiresorptive drugs used for the treatment of metabolic bone diseases. Although the molecular targets of bisphosphonates have not been identified, these compounds inhibit bone resorption by mechanisms that can lead to osteoclast apoptosis. Bisphosphonates also induce apoptosis in mouse J774 macrophages in vitro, probably by the same mechanisms that lead to osteoclast apoptosis. We have found that, in J774 macrophages, nitrogen-containing bisphosphonates (such as alendronate, ibandronate, and risedronate) inhibit post-translational modification (prenylation) of proteins, including the GTP-binding protein Ras, with farnesyl or geranylgeranyl isoprenoid groups. Clodronate did not inhibit protein prenylation. Mevastatin, an inhibitor of 3-hydroxy-3-methylglutatyl (HMG)-CoA reductase and hence the biosynthetic pathway required for the production of farnesyl pyrophosphate and geranylgeranyl pyrophosphate, also caused apoptosis in J774 macrophages and murine osteoclasts in vitro. Furthermore, alendronate-induced apoptosis, like mevastatin-induced apoptosis, could be suppressed in J774 cells by the addition of farnesyl pyrophosphate or geranylgeranyl pyrophosphate, while the effect of alendronate on osteoclast number and bone resorption in murine calvariae in vitro could be overcome by the addition of mevalonic acid. These observations suggest that nitrogen-containing bisphosphonate drugs cause apoptosis following inhibition of post-translational prenylation of proteins such as Ras. It is likely that these potent antiresorptive bisphosphonates also inhibit bone resorption by preventing protein prenylation in osteoclasts and that enzymes of the mevalonate pathway or prenyl protein transferases are the molecular targets of the nitrogen-containing bisphosphonates. Furthermore, the data support the view that clodronate acts by a different mechanism.

Osteoclast-derived activity in the coupling of bone formation to resorption.

T. Martin,  N Sims (2005)
The cells of bone and the immune system communicate by means of soluble and membrane-bound cytokines and growth factors. Through local signalling mechanisms, cells of the osteoblast lineage control the formation and activity of osteoclasts and, therefore, the resorption of bone. Both T and B lymphocytes produce activators and inhibitors of osteoclast formation. A local 'coupling factor' linking bone resorption to subsequent formation in the bone multicellular unit (BMU) has long been proposed as the key regulator of the bone remodelling process, but never identified. There is evidence in support of the view that the coupling mechanism is dependent on growth factors released from the bone matrix during resorption, or is generated from maturing osteoblasts. We argue that osteoclasts contribute in important ways to the transiently activated osteoclast, and stimulate osteoblast lineage cells to begin replacing the resorbed bone in each BMU.

This is an open access article published by Portland Press Limited on behalf of the Biochemical Society and distributed under the Creative Commons Attribution License 4.0 (CC BY-NC-ND).