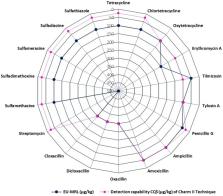 The study carried out a primary validation of Charm II tests for the detection of antimicrobial residues in aquaculture fish. The validation was performed according to European Commission Decision 2002/657/ EC and the parameters determined included: detection capability, repeatability, reproducibility, specificity and robustness for the detection of antimicrobial residues in fish. Fish materials from different species including cat fish, trout, salmon, sea bass, tilapia, lingue and pangasius, were spiked with varying concentrations of selected antimicrobials including sulfonamides, β-lactams, macrolides, tetracyclines and aminoglycosides to determine the detection capabilities and other validation parameters of the Charm II tests. Results of the validation showed that the detection capabilities for the tetracyclines ranged from 25 to 100 µg/kg, while the sulfonamides and aminoglycosides were detected at 25 µg/kg for all species under study. The detection capabilities for the beta-lactams ranged from 25 to 300 µg/kg; and was 100 µg/kg for the tested macrolides. Results of the study showed that there was no significant difference between counts for samples read immediately after addition of the scintillation liquid and those read 14 h after addition of the scintillation liquid, provided that there was good vortexing before analysis. There was also no significant difference between counts for the same samples analyzed in different runs under repeatability and reproducibility conditions at the same spiking concentrations for the different fish species analyzed. The relative standard deviation for both repeatability and reproducibility ranged from 1.2 to 15.1%. The Charm II tests were found to be 100% group specific, as none of the antimicrobials kits, gave false positive results when testing non-target antimicrobial drugs. Results of this study demonstrate the suitability of the Charm II technique as a rapid screening tool for detection of antimicrobial residues in a variety of fish species at maximum residue limits (MRL) established in the EU guidelines, with the exception of tilmicosin which was detected at 2 MRL. The results also prove the robustness, specificity, reliability and precision of the Charm II assay in the detection of various antimicrobial residuals in fish and its applicability for the rapid evaluation of the quality of aquaculture fish for safety and trade purposes.

William B. Levy,  B Marshall (2011)
Antimicrobials are valuable therapeutics whose efficacy is seriously compromised by the emergence and spread of antimicrobial resistance. The provision of antibiotics to food animals encompasses a wide variety of nontherapeutic purposes that include growth promotion. The concern over resistance emergence and spread to people by nontherapeutic use of antimicrobials has led to conflicted practices and opinions. Considerable evidence supported the removal of nontherapeutic antimicrobials (NTAs) in Europe, based on the "precautionary principle." Still, concrete scientific evidence of the favorable versus unfavorable consequences of NTAs is not clear to all stakeholders. Substantial data show elevated antibiotic resistance in bacteria associated with animals fed NTAs and their food products. This resistance spreads to other animals and humans-directly by contact and indirectly via the food chain, water, air, and manured and sludge-fertilized soils. Modern genetic techniques are making advances in deciphering the ecological impact of NTAs, but modeling efforts are thwarted by deficits in key knowledge of microbial and antibiotic loads at each stage of the transmission chain. Still, the substantial and expanding volume of evidence reporting animal-to-human spread of resistant bacteria, including that arising from use of NTAs, supports eliminating NTA use in order to reduce the growing environmental load of resistance genes.

Heavy use of prophylactic antibiotics in aquaculture: a growing problem for human and animal health and for the environment.

Felipe Cabello (2006)
The accelerated growth of finfish aquaculture has resulted in a series of developments detrimental to the environment and human health. The latter is illustrated by the widespread and unrestricted use of prophylactic antibiotics in this industry, especially in developing countries, to forestall bacterial infections resulting from sanitary shortcomings in fish rearing. The use of a wide variety of antibiotics in large amounts, including non-biodegradable antibiotics useful in human medicine, ensures that they remain in the aquatic environment, exerting their selective pressure for long periods of time. This process has resulted in the emergence of antibiotic-resistant bacteria in aquaculture environments, in the increase of antibiotic resistance in fish pathogens, in the transfer of these resistance determinants to bacteria of land animals and to human pathogens, and in alterations of the bacterial flora both in sediments and in the water column. The use of large amounts of antibiotics that have to be mixed with fish food also creates problems for industrial health and increases the opportunities for the presence of residual antibiotics in fish meat and fish products. Thus, it appears that global efforts are needed to promote more judicious use of prophylactic antibiotics in aquaculture as accumulating evidence indicates that unrestricted use is detrimental to fish, terrestrial animals, and human health and the environment.

Human health consequences of use of antimicrobial agents in aquaculture.