Spheno-orbital encephalocele: A rare entity – A case report and review of literature 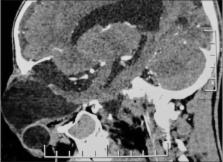 To report a rare case of basal encephalocele (spheno-orbital encephalocele), managed successfully in our institute. This is one of the rarest type of encephaloceles with very little literature available. In this case, sphenoid dysplasia was not associated with type 1 Neurofibromatosis.

A 22 year old male presented with a history of protrusion of right eye since the age of 7 years followed by progressive diminution of vision in the same eye for 5 months. MRI scan was suggestive of sphenoid dysplasia with herniation of right fronto-temporal lobe. The patient was operated upon with right frontal craniotomy with excision of encephalocele and repair of skull base. Subsequently, the patient underwent plastic surgery for facial skin remodeling.

Patient's encephalocele reduced completely after excision and repair with good cosmetic results and no neurological deficits. There is no evidence of recurrence till recent follow-up.

Basal encephaloceles are very rare. Complete excision of encephalocele with repair of the defect should be the aim to achieve cure.

M-C Aubry,  J P Aubry,  M Dommergues (2003)
Over the past 20 years, the spectrum of neonatal neurological malformations has changed due to the diffusion of ultrasound, performed either routinely or as required by maternal alpha-fetoprotein screening or history.

K Kinouchi,  Miho S. Kitamura,  K Fukumitsu … (1998)
A four-month-old male infant with basal encephalocele of the transsphenoidal type presented with upper airway obstruction and facial midline deformity, including cleft lip, cleft palate, hypertelorism and exophthalmos. Basal encephalocele is a rare disease, and usually not detectable from the outside. In this case, initially the cause of an upper airway obstruction was considered to be posterior rhinostenosis, and posterior rhinoplasty with inferior nasal conchectomy was scheduled. However, in preoperative examination, computed tomography (CT) and magnetic resonance imaging (MRI) revealed a bony defect in the sphenoidal bone and a cystic mass in communication with cerebrospinal fluid, herniating into the nasal cavity through the bony defect. The mass was diagnosed as a transsphenoidal encephalocele, the scheduled operation cancelled, and tracheostomy performed for airway management. The possibility of basal encephalocele should be considered in the case of upper airway obstruction with facial midline deformity.