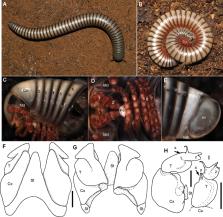 Gondwana to Asia: Plate tectonics, paleogeography and the biological connectivity of the Indian sub-continent from the Middle Jurassic through latest Eocene (166–35 Ma)

Madagascar as a model region of species diversification.

Miguel Vences,  Katharina C. Wollenberg,  David R Vieites … (2009)
Tropical biotas provide excellent settings in which to explore mechanisms of evolutionary diversification, yet these processes remain poorly understood. Pioneering work on biodiversity patterns and diversification processes in other tropical regions has recently been complemented by studies in Madagascar. Here we review diversity models and diversification mechanisms proposed for the fauna of this island and the perspectives for testing them. Madagascar has a diverse biota that has evolved in isolation, and is characterised by regionally pronounced and locally steep environmental gradients, common patterns of microendemism across taxa and numerous evolutionary radiations. These characteristics establish Madagascar as a promising system for the study of pattern and process in species diversification.

Christopher J. Raxworthy,  Chad Pearson (2009)
Substantial insular speciation has resulted in exceptionally high levels of endemism in Madagascar, creating locally restricted species' ranges that remain poorly understood. The contributions of alternative processes that could influence patterns of local endemism-including speciation by geographic isolation or adaptation to environmental gradients-are widely debated, both for Madagascar and elsewhere. A recently proposed hypothesis (the "watershed hypothesis") suggests that allopatric speciation driven by isolation in watersheds during Quaternary climate shifts provides a general explanation for patterns of local endemism across taxa in Madagascar. Here we tested coincidence between species' distributions and areas of endemism predicted by two contrasting biogeographic hypotheses: (1) the watershed hypothesis, and (2) an alternative hypothesis driven by climatic gradients (the "current climate hypothesis"). Statistical significance of coincidence was assessed by comparing against a null model. Surprisingly, we found that extant distributions of lemurs, geckos, and chameleons reveal species patterns that are significantly coincident with the watershed and current climate hypotheses. These results strongly support local endemism developing from multiple processes, even among closely related species. Our findings thus indicate that pluralistic approaches will offer the best option both for understanding processes that generate local endemism, and for incorporating endemism within conservation priority setting.