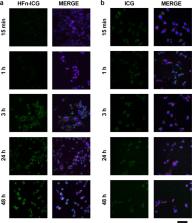 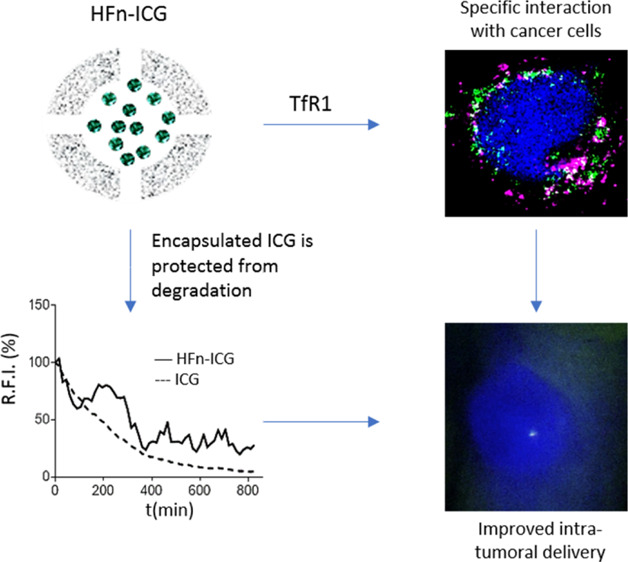 Indocyanine green (ICG) is a fluorescent dye with a strong emission in the near-infrared spectral range that allows deep signal penetration and minimal interference of tissue autofluorescence. It has been employed in clinics for different applications, among which the more interesting is certainly near-infrared fluorescence image-guided surgery. This technique has found wide application in surgical oncology for lymph node mapping or for laparoscopic surgery. Despite ICG being useful for tracking loco-regional lymph nodes, it does not provide any information about cancer involvement of such lymph nodes or lymphatic vessels, lacking any tumor-targeting specificity. However, the clinical need in surgical oncology is not only a specific tracking of metastatic nodes but also the intraoperative detection of micrometastatic deposits. Here, we have exploited a nanotechnological solution to improve ICG usefulness by its encapsulation in H-ferritin (HFn) nanocages. They are natural protein-based nanoparticles that exhibit some very interesting features as delivery systems in oncological applications because they display specific tumor homing. We show that HFn loaded with ICG exhibits specific uptake into different cancer cell lines and is able to deliver ICG to the tumor more efficiently than the free dye in an in vivo model of TNBC. Our results pave the way for the application of ICG-loaded HFn in fluorescence image-guided surgery of cancer.

Armando E. Giuliano,  Daniel M. Kirgan,  J Michael Guenther … (1994)
The authors report the feasibility and accuracy of intraoperative lymphatic mapping with sentinel lymphadenectomy in patients with breast cancer. Axillary lymph node dissection (ALND) for breast cancer generally is accepted for its staging and prognostic value, but the extent of dissection remains controversial. Blind lymph node sampling or level I dissection may miss some nodal metastases, but ALND may result in lymphedema. In melanoma, intraoperative lymph node mapping with sentinel lymphadenectomy is an effective and minimally invasive alternative to ALND for identifying nodes containing metastases. One hundred seventy-four mapping procedures were performed using a vital dye injected at the primary breast cancer site. Axillary lymphatics were identified and followed to the first ("sentinel") node, which was selectively excised before ALND. Sentinel nodes were identified in 114 of 174 (65.5%) procedures and accurately predicted axillary nodal status in 109 of 114 (95.6%) cases. There was a definite learning curve, and all false-negative sentinel nodes occurred in the first part of the study; sentinel nodes identified in the last 87 procedures were 100% predictive. In 16 of 42 (38.0%) clinically negative/pathologically positive axillae, the sentinel node was the only tumor-involved lymph node identified. The anatomic location of the sentinel node was examined in the 54 most recent procedures; ten cases had only level II nodal metastases that could have been missed by sampling or low (level I) axillary dissection. This experience indicates that intraoperative lymphatic mapping can accurately identify the sentinel node--i.e., the axillary lymph node most likely to contain breast cancer metastases--in some patients. The technique could enhance staging accuracy and, with further refinements and experience, might alter the role of ALND.

Umberto Veronesi,  Giovanni Paganelli,  Viviana Galimberti … (1997)
Axillary lymph-node dissection is an important staging procedure in the surgical treatment of breast cancer. However, early diagnosis has led to increasing numbers of dissections in which axillary nodes are free of disease. This raises questions about the need for the procedure. We carried out a study to assess, first, whether a single axillary lymph node (sentinel node) initially receives malignant cells from a breast carcinoma and, second, whether a clear sentinel node reliably forecasts a disease-free axilla. In a consecutive series of 163 women with operable breast carcinoma, we injected microcolloidal particles of human serum albumin labelled with technetium-99m. This tracer was injected subdermally, close to the tumour site, on the day before surgery, and scintigraphic images of the axilla and breast were taken 10 min, 30 min, and 3 h later. A mark was placed on the skin over the site of the radioactive node (sentinel node). During breast surgery, a hand-held gamma-ray detector probe was used to locate the sentinel node, and make possible its separate removal via a small axillary incision. Complete axillary lymphadenectomy was then done. The sentinel node was tagged separately from other nodes. Permanent sections of all removed nodes were prepared for pathological examination. From the sentinel node, we could accurately predict axillary lymph-node status in 156 (97.5%) of the 160 patients in whom a sentinel node was identified, and in all cases (45 patients) with tumours less than 1.5 cm in diameter. In 32 (38%) of the 85 cases with metastatic axillary nodes, the only positive node was the sentinel node. In the large majority of patients with breast cancer, lymphoscintigraphy and gamma-probe-guided surgery can be used to locate the sentinel node in the axilla, and thereby provide important information about the status of axillary nodes. Patients without clinical involvement of the axilla should undergo sentinel-node biopsy routinely, and may be spared complete axillary dissection when the sentinel node is disease-free.

A Review of Indocyanine Green Fluorescent Imaging in Surgery

Jarmo Alander,  Ilkka Santeri Kaartinen,  Aki Laakso … (2012)
The purpose of this paper is to give an overview of the recent surgical intraoperational applications of indocyanine green fluorescence imaging methods, the basics of the technology, and instrumentation used. Well over 200 papers describing this technique in clinical setting are reviewed. In addition to the surgical applications, other recent medical applications of ICG are briefly examined.