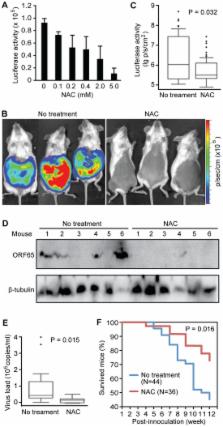 Kaposi's sarcoma-associated herpesvirus (KSHV) is the etiologic agent of all clinical forms of Kaposi's sarcoma (KS) and several other malignancies. The life cycle of KSHV consists of latent and lytic phases. While establishment of viral latency is essential for KSHV to evade host immune surveillances, viral lytic replication promotes KSHV-induced malignancies. In this study, we show that the reactive oxygen species (ROS) hydrogen peroxide (H 2O 2) induces KSHV reactivation from latency. Furthermore, induction of KSHV reactivation by oxidative stress, hypoxia, and proinflammatory and proangiogenic cytokines, which are physiological hallmarks in all clinical forms of KS patients, is mediated by H 2O 2. Significantly, antioxidants inhibit H 2O 2-induced KSHV lytic replication in culture and in a mouse model of KSHV-induced lymphoma. These results show that ROS is likely an important physiological cue that triggers KSHV replication. The discovery of this novel mechanism of KSHV reactivation indicates that antioxidants and anti-inflammation drugs might be promising preventive and therapeutic agents for effectively targeting KSHV replication and KSHV-related malignancies.

X.-Y. Chang,  E Cesarman,  D Knowles … (1995)
DNA fragments that appeared to belong to an unidentified human herpesvirus were recently found in more than 90 percent of Kaposi's sarcoma lesions associated with the acquired immunodeficiency syndrome (AIDS). These fragments were also found in 6 of 39 tissue samples without Kaposi's sarcoma, including 3 malignant lymphomas, from patients with AIDS, but not in samples from patients without AIDS. We examined the DNA of 193 lymphomas from 42 patients with AIDS and 151 patients who did not have AIDS. We searched the DNA for sequences of Kaposi's sarcoma-associated herpesvirus (KSHV) by Southern blot hybridization, the polymerase chain reaction (PCR), or both. The PCR products in the positive samples were sequences and compared with the KSHV sequences in Kaposi's sarcoma tissues from patients with AIDS. KSHV sequences were identified in eight lymphomas in patients infected with the human immunodeficiency virus. All eight, and only these eight, were body-cavity-based lymphomas--that is, they were characterized by pleural, pericardial, or peritoneal lymphomatous effusions. All eight lymphomas also contained the Epstein-Barr viral genome. KSHV sequences were not found in the other 185 lymphomas. KSHV sequences were 40 to 80 times more abundant in the body-cavity-based lymphomas than in the Kaposi's sarcoma lesions. A high degree of conservation of KSHV sequences in Kaposi's sarcoma and in the eight lymphomas suggests the presence of the same agent in both lesions. The recently discovered KSHV DNA sequences occur in an unusual subgroup of AIDS-related B-cell lymphomas, but not in any other lymphoid neoplasm studied thus far. Our finding strongly suggests that a novel herpesvirus has a pathogenic role in AIDS-related body-cavity-based lymphomas.

JNK1: a protein kinase stimulated by UV light and Ha-Ras that binds and phosphorylates the c-Jun activation domain.

Benoit Dérijard,  Masahiko Hibi,  I-Huan Wu … (1994)
The ultraviolet (UV) response of mammalian cells is characterized by a rapid and selective increase in gene expression mediated by AP-1 and NF-kappa B. The effect on AP-1 transcriptional activity results, in part, from enhanced phosphorylation of the c-Jun NH2-terminal activation domain. Here, we describe the molecular cloning and characterization of JNK1, a distant relative of the MAP kinase group that is activated by dual phosphorylation at Thr and Tyr during the UV response. Significantly, Ha-Ras partially activates JNK1 and potentiates the activation caused by UV. JNK1 binds to the c-Jun transactivation domain and phosphorylates it on Ser-63 and Ser-73. Thus, JNK1 is a component of a novel signal transduction pathway that is activated by oncoproteins and UV irradiation. These properties indicate that JNK1 activation may play an important role in tumor promotion.

Publisher ID: PPATHOGENS-D-10-00054
DOI: 10.1371/journal.ppat.1002054
PMC ID: 3098240
PubMed ID: 21625536
Copyright statement: Ye et al. This is an open-access article distributed under the terms of the Creative Commons Attribution License, which permits unrestricted use, distribution, and reproduction in any medium, provided the original author and source are credited.