Glucocorticoid Generates ROS to Induce Oxidative Injury in the Hippocampus, Leading to Impairment of Cognitive Function of Rats 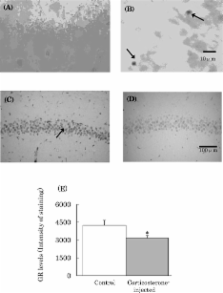 The present study attempted to clarify whether over-secretion of glucocorticoids in the serum caused by increased hypothalamus-pituitary-adrenal activity induces oxidative stress in the rat brain, and how the stress causes the emergence of cognitive deficits. When rats were subcutaneously injected with corticosterone, lipid hydroperoxides and protein carbonyls increased markedly in the hippocampus in association with a decrease in activity of antioxidative enzymes, such as superoxide dismutase, catalase and glutathione peroxidase. These results suggest that high-level corticosterone in the serum induces reactive oxygen species (ROS), leading to oxidative damage in the hippocampus. After administration of corticosterone to rats, glucose and superoxide levels in the serum increased markedly. Furthermore, pyramidal cell apoptosis was observed to accompany the loss of glucocorticoid receptors at the cornus ammonis 1 region of the hippocampus. Rats injected with corticosterone showed marked deficits in memory function. The present results imply that ROS generated from the glycation reaction of increased glucose levels caused by gluconeogenesis activation through glucocorticoid with proteins in the serum attack the hippocampus to induce neurodegeneration, resulting in cognitive deficits in rats.

SA Ben-Sasson,  Y Sherman,  Y Gavrieli (1992)
Programmed cell death (PCD) plays a key role in developmental biology and in maintenance of the steady state in continuously renewing tissues. Currently, its existence is inferred mainly from gel electrophoresis of a pooled DNA extract as PCD was shown to be associated with DNA fragmentation. Based on this observation, we describe here the development of a method for the in situ visualization of PCD at the single-cell level, while preserving tissue architecture. Conventional histological sections, pretreated with protease, were nick end labeled with biotinylated poly dU, introduced by terminal deoxy- transferase, and then stained using avidin-conjugated peroxidase. The reaction is specific, only nuclei located at positions where PCD is expected are stained. The initial screening includes: small and large intestine, epidermis, lymphoid tissues, ovary, and other organs. A detailed analysis revealed that the process is initiated at the nuclear periphery, it is relatively short (1-3 h from initiation to cell elimination) and that PCD appears in tissues in clusters. The extent of tissue-PCD revealed by this method is considerably greater than apoptosis detected by nuclear morphology, and thus opens the way for a variety of studies.

The role of the hippocampus in feedback regulation of the hypothalamic-pituitary-adrenocortical axis.

Cognitive impairment of rats caused by oxidative stress and aging, and its prevention by vitamin E.

Koji Fukui,  Takahiro Hayasaka,  Nao-Omi Omoi … (2002)
In order to verify whether brain damage caused by chronic oxidative stress induces the impairment of cognitive function, the ability of learning and memory was assessed using the water maze and the eight-arm radial maze tasks. Young rats showed significantly greater learning ability before the stress than the old and vitamin E-deficient rats. At five days after subjection to oxidative stress, the memory function of the young declined toward the level of that in the aged rats maintained under normal condition. This phenomenon is supported by the findings that the delayed-type apoptosis appeared in the CA1 region of the hippocampus of the young at five to seven days after the stress. Vitamin E supplementation to the young accelerated significantly their learning functions before the stress and prevented the deficit of memory caused by the stress. When rats were subjected to stress, thiobarbituric acid-reactive substance (TBARS), lipid hydroperoxides, and protein carbonyls were significantly increased in synaptic plasma membranes. It was found that zeta-potential of the synaptic membrane surface was remarkably decreased. These phenomena were also observed in the aged and vitamin E-deficient rats maintained under normal condition. These results suggest that oxidative damage to the rat synapse in the cerebral cortex and hippocampus during aging may contribute to the deficit of cognitive functions.