Treatment of tardive dyskinesia with VMAT-2 inhibitors: a systematic review and meta-analysis of randomized controlled trials 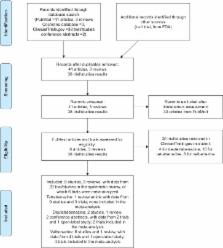 The aim of this study was to summarize the characteristics, efficacy, and safety of vesicular monoamine transporter-2 (VMAT-2) inhibitors for treating tardive dyskinesia (TD).

We conducted a literature search in PubMed, Cochrane Database, and ClinicalTrials.gov, screening for systematic reviews, meta-analyses or double-blind, randomized, placebo-controlled trials (DBRPCTs) reporting efficacy or safety data of VMAT-2 inhibitors (tetrabenazine, deutetrabenazine, and valbenazine) in patients with TD. A random effects meta-analysis of efficacy and safety data from DBRPCTs was performed.

The 2 VMAT-2 inhibitors, valbenazine and deutetrabenazine, are effective in treating TD, both acutely and long-term, without concerns about increased risk of depression or suicide in the TD population. No head-to-head comparison among VMAT-2 inhibitors and no high-quality, meta-analyzable data are available for tetrabenazine in patients with TD.

Suicide and schizophrenia: a systematic review of rates and risk factors

Kahyee Hor,  Mark Taylor (2010)
Risk assessment is a core skill in psychiatry. Risk prediction for suicide in schizophrenia is known to be complex. We undertook a systematic review of all original studies concerning suicide in schizophrenia published since 2004. We found 51 data-containing studies (from 1281 studies screened) that met our inclusion criteria, and ranked these by standardized quality criteria. Estimates of rates of suicide and risk factors associated with later suicide were identified, and the risk factors were grouped according to type and strength of association with suicide. Consensus on the lifetime risk of suicide was a rate of approximately 5%. Risk factors with a strong association with later suicide included being young, male, and with a high level of education. Illness-related risk factors were important predictors, with number of prior suicide attempts, depressive symptoms, active hallucinations and delusions, and the presence of insight all having a strong evidential basis. A family history of suicide, and comorbid substance misuse were also positively associated with later suicide. The only consistent protective factor for suicide was delivery of and adherence to effective treatment. Prevention of suicide in schizophrenia will rely on identifying those individuals at risk, and treating comorbid depression and substance misuse, as well as providing best available treatment for psychotic symptoms.

Suicide and attempted suicide in bipolar disorder: a systematic review of risk factors.

Louise Harriss,  C Haw,  Julia Sinclair … (2005)
To determine the main risk factors for suicide and nonfatal suicidal behavior in patients with bipolar disorder through a systematic review of the international literature. Studies were identified through electronic searches of MEDLINE (1966-December 2003), EMBASE (1980-December 2003), PsycINFO (1872-November 2003), and Biological Abstracts (1985-December 2003) using index and free-text search terms for bipolar disorder, bipolar depression, manic depression, mania, and affective disorders; combined with terms for self-harm, self-injury, suicide, attempted suicide, automutilation, self-mutilation, self-poisoning, and self-cutting; and combined with terms for risk, case control, cohort, comparative, longitudinal, and follow-up studies. No language restrictions were applied to the search. Included studies were cohort, case-control, and cross-sectional investigations of patients with bipolar disorder in which suicide (13 studies) or attempted suicide (23 studies) was reported as an outcome. The selected studies also used diagnostic tools including the DSM, International Classification of Diseases, and Research Diagnostic Criteria. Meta-analysis of factors reported in more than 1 study identified the main risk factors for suicide as a previous suicide attempt and hopelessness. The main risk factors for nonfatal suicidal behavior included family history of suicide, early onset of bipolar disorder, extent of depressive symptoms, increasing severity of affective episodes, the presence of mixed affective states, rapid cycling, comorbid Axis I disorders, and abuse of alcohol or drugs. Prevention of suicidal behavior in patients with bipolar disorder should include attention to these risk factors in assessment and treatment, including when deciding whether to initiate treatment aimed specifically at reducing suicide risk.

Howard Margolese,  G Chouinard (2005)
The Extrapyramidal Symptom Rating Scale (ESRS) was developed to assess four types of drug-induced movement disorders (DIMD): Parkinsonism, akathisia, dystonia, and tardive dyskinesia (TD). Comprehensive ESRS definitions and basic instructions are given. Factor analysis provided six ESRS factors: 1) hypokinetic Parkinsonism; 2) orofacial dyskinesia; 3) trunk/limb dyskinesia; 4) akathisia; 5) tremor; and 6) tardive dystonia. Two pivotal studies found high inter-rater reliability correlations in both antipsychotic-induced movement disorders and idiopathic Parkinson disease. For inter-rater reliability and certification of raters, >or=80% of item ratings of the complete scale should be +/-1 point of expert ratings and >or=70% of ratings on individual items of each ESRS subscale should be +/-1 point of expert ratings. During a cross-scale comparison, AIMS and ESRS were found to have a 96% (359/374) agreement between TD-defined cases by DSM-IV TD criteria. Two recent international studies using the ESRS included over 3000 patients worldwide and showed an incidence of TD ranging from 10.2% (2000) to 12% (1998). ESRS specificity was investigated through two different approaches, path analyses and ANCOVA PANSS factors changes, which found that ESRS measurement of drug-induced EPS is valid and discriminative from psychiatric symptoms.