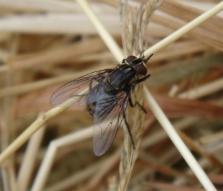 Stomoxys flies are mechanical vectors of pathogens present in the blood and skin of their animal hosts, especially livestock, but occasionally humans. In livestock, their direct effects are disturbance, skin lesions, reduction of food intake, stress, blood loss, and a global immunosuppressive effect. They also induce the gathering of animals for mutual protection; meanwhile they favor development of pathogens in the hosts and their transmission. Their indirect effect is the mechanical transmission of pathogens. In case of interrupted feeding, Stomoxys can re-start their blood meal on another host. When injecting saliva prior to blood-sucking, they can inoculate some infected blood remaining on their mouthparts. Beside this immediate transmission, it was observed that Stomoxys may keep some blood in their crop, which offers a friendly environment for pathogens that could be regurgitated during the next blood meal; thus a delayed transmission by Stomoxys seems possible. Such a mechanism has a considerable epidemiological impact since it allows inter-herd transmission of pathogens. Equine infectious anemia, African swine fever, West Nile, and Rift Valley viruses are known to be transmitted by Stomoxys, while others are suspected. Rickettsia ( Anaplasma, Coxiella), other bacteria and parasites ( Trypanosoma spp., Besnoitia spp.) are also transmitted by Stomoxys. Finally, Stomoxys was also found to act as an intermediate host of the helminth Habronema microstoma and may be involved in the transmission of some Onchocerca and Dirofilaria species. Being cosmopolite, Stomoxys calcitrans might have a worldwide and greater impact than previously thought on animal and human pathogen transmission.

The ecology of Bacillus anthracis.

Martin Hugh-Jones,  Jason Kenna Blackburn (2009)
The global distribution of anthrax is largely determined by soils with high calcium levels and a pH above 6.1, which foster spore survival. It is speculated that the spore exosporium probably plays a key part by restricting dispersal and thereby increasing the probability of a grazing animal acquiring a lethal dose. 'Anthrax Seasons' are characterized by hot-dry weather which stresses animals and reduces their innate resistance to infection allowing low doses of spores to be infective. Necrophagic flies act as case-multipliers and haemophagic flies as space-multipliers; the latter are aided by climatic factors which play a key part in whether epidemics occur. Host death is a function of species sensitivity to the toxins. The major function of scavengers is to open the carcass, spill fluids, and thereby aid bacilli dispersal and initiate sporulation. In the context of landscape ecology viable spore distribution is a function of mean annual temperature, annual precipitation, elevation, mean NDVI, annual NDVI amplitude, soil moisture content, and soil pH.

Visual and olfactory responses of haematophagous Diptera to host stimuli.

Peter G Gibson,  Steve Torr (1999)
Key biotic and environmental constraints on the host-orientated behaviour of haematophagous Diptera are summarized. For each major group of biting Diptera, responses to host stimuli are reviewed, including activation and ranging behaviour, long-range and short-range olfactory responses and visual responses. Limitations to the comparison of results between groups of species, and the practical problems of experimental method and equipment are discussed.

Antigens and alternatives for control of Anaplasma marginale infection in cattle.

Katherine Kocan,  José de la Fuente,  Alberto A Guglielmone … (2003)
Anaplasmosis, a tick-borne cattle disease caused by the rickettsia Anaplasma marginale, is endemic in tropical and subtropical areas of the world. The disease causes considerable economic loss to both the dairy and beef industries worldwide. Analyses of 16S rRNA, groESL, and surface proteins have resulted in the recent reclassification of the order Rickettsiales. The genus Anaplasma, of which A. marginale is the type species, now also includes A. bovis, A. platys, and A. phagocytophilum, which were previously known as Ehrlichia bovis, E. platys, and the E. phagocytophila group (which causes human granulocytic ehrlichiosis), respectively. Live and killed vaccines have been used for control of anaplasmosis, and both types of vaccines have advantages and disadvantages. These vaccines have been effective in preventing clinical anaplasmosis in cattle but have not blocked A. marginale infection. Thus, persistently infected cattle serve as a reservoir of infective blood for both mechanical transmission and infection of ticks. Advances in biochemical, immunologic, and molecular technologies during the last decade have been applied to research of A. marginale and related organisms. The recent development of a cell culture system for A. marginale provides a potential source of antigen for the development of improved killed and live vaccines, and the availability of cell culture-derived antigen would eliminate the use of cattle in vaccine production. Increased knowledge of A. marginale antigen repertoires and an improved understanding of bovine cellular and humoral immune responses to A. marginale, combined with the new technologies, should contribute to the development of more effective vaccines for control and prevention of anaplasmosis.