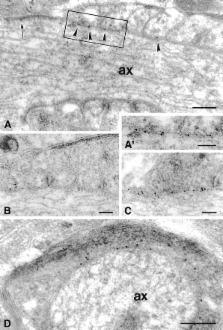 Two major isoforms of the cell adhesion molecule neurofascin NF186 and NF155 are expressed in the central nervous system (CNS). We have investigated their roles in the assembly of the node of Ranvier and show that they are targeted to distinct domains at the node. At the onset of myelination, NF186 is restricted to neurons, whereas NF155 localizes to oligodendrocytes, the myelin-forming glia of the CNS. Coincident with axon ensheathment, NF155 clusters at the paranodal regions of the myelin sheath where it localizes in apposition to the axonal adhesion molecule paranodin/contactin-associated protein (Caspr1), which is a constituent of the septate junction-like axo-glial adhesion zone. Immunoelectron microscopy confirmed that neurofascin is a glial component of the paranodal axo-glial junction. Concentration of NF155 with Caspr1 at the paranodal junctions of peripheral nerves is also a feature of Schwann cells. In Shiverer mutant mice, which assemble neither compact CNS myelin nor normal paranodes, NF155 (though largely retained at the cell body) is also distributed at ectopic sites along axons, where it colocalizes with Caspr1. Hence, NF155 is the first glial cell adhesion molecule to be identified in the paranodal axo-glial junction, where it likely interacts with axonal proteins in close association with Caspr1.

Caspr2, a new member of the neurexin superfamily, is localized at the juxtaparanodes of myelinated axons and associates with K+ channels.

S Poliak,  S Einheber,  P Shrager … (1999)
Rapid conduction in myelinated axons depends on the generation of specialized subcellular domains to which different sets of ion channels are localized. Here, we describe the identification of Caspr2, a mammalian homolog of Drosophila Neurexin IV (Nrx-IV), and show that this neurexin-like protein and the closely related molecule Caspr/Paranodin demarcate distinct subdomains in myelinated axons. While contactin-associated protein (Caspr) is present at the paranodal junctions, Caspr2 is precisely colocalized with Shaker-like K+ channels in the juxtaparanodal region. We further show that Caspr2 specifically associates with Kv1.1, Kv1.2, and their Kvbeta2 subunit. This association involves the C-terminal sequence of Caspr2, which contains a putative PDZ binding site. These results suggest a role for Caspr family members in the local differentiation of the axon into distinct functional subdomains.

AnkyrinG. A new ankyrin gene with neural-specific isoforms localized at the axonal initial segment and node of Ranvier.

Helen Lambert,  V Bennett,  E Kordeli (1995)
We have characterized a new ankyrin gene, expressed in brain and other tissues, that is subject to extensive tissue-specific alternative mRNA processing. The full-length polypeptide has a molecular mass of 480 kDa and includes a predicted globular head domain, with membrane- and spectrin-binding activities, as well as an extended "tail" domain. We term this gene ankyrinG based on its giant size and general expression. Two brain-specific isoforms of 480 kDa and 270 kDa were identified that contain a unique stretch of sequence highly enriched in serine and threonine residues immediately following the globular head domain. Antibodies against the serine-rich domain and spectrin-binding domain revealed labeling of nodes of Ranvier and axonal initial segments. Ankyrin-binding proteins also known to be localized in these specialized membrane domains include the voltage-dependent sodium channel, the sodium/potassium ATPase, sodium/calcium exchanger, and members of the neurofascin/L1 family of cell adhesion molecules. The neural-specific ankyrinG polypeptides are candidates to participate in maintenance/targeting of ion channels and cell adhesion molecules to nodes of Ranvier and axonal initial segments.

The Axonal Membrane Protein Caspr, a Homologue of Neurexin IV, Is a Component of the Septate-like Paranodal Junctions That Assemble during Myelination

Steven Einheber,  George Zanazzi,  William Ching … (1997)
We have investigated the potential role of contactin and contactin-associated protein (Caspr) in the axonal–glial interactions of myelination. In the nervous system, contactin is expressed by neurons, oligodendrocytes, and their progenitors, but not by Schwann cells. Expression of Caspr, a homologue of Neurexin IV, is restricted to neurons. Both contactin and Caspr are uniformly expressed at high levels on the surface of unensheathed neurites and are downregulated during myelination in vitro and in vivo. Contactin is downregulated along the entire myelinated nerve fiber. In contrast, Caspr expression initially remains elevated along segments of neurites associated with nascent myelin sheaths. With further maturation, Caspr is downregulated in the internode and becomes strikingly concentrated in the paranodal regions of the axon, suggesting that it redistributes from the internode to these sites. Caspr expression is similarly restricted to the paranodes of mature myelinated axons in the peripheral and central nervous systems; it is more diffusely and persistently expressed in gray matter and on unmyelinated axons. Immunoelectron microscopy demonstrated that Caspr is localized to the septate-like junctions that form between axons and the paranodal loops of myelinating cells. Caspr is poorly extracted by nonionic detergents, suggesting that it is associated with the axon cytoskeleton at these junctions. These results indicate that contactin and Caspr function independently during myelination and that their expression is regulated by glial ensheathment. They strongly implicate Caspr as a major transmembrane component of the paranodal junctions, whose molecular composition has previously been unknown, and suggest its role in the reciprocal signaling between axons and glia.