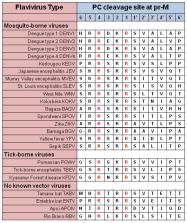 A wide variety of viruses exploit furin and other proprotein convertases (PCs) of the constitutive protein secretion pathway in order to regulate their cell entry mechanism and infectivity. Surface proteins of enveloped, as well as non-enveloped, viruses become processed by these proteases intracellularly during morphogenesis or extracellularly after egress and during entry in order to produce mature virions activated for infection. Although viruses also take advantage of other proteases, it is when some viruses become reactive with PCs that they may develop high pathogenicity. Besides reacting with furin, some viruses may also react with the PCs of the other specificity group constituted by PC4/PC5/PACE4/PC7. The targeting of PCs for inhibition may result in a useful strategy to treat infections with some highly pathogenic viruses. A wide variety of PC inhibitors have been developed and tested for their antiviral activity in cell-based assays.

M Hatta (2001)
In 1997, an H5N1 influenza A virus was transmitted from birds to humans in Hong Kong, killing 6 of the 18 people infected. When mice were infected with the human isolates, two virulence groups became apparent. Using reverse genetics, we showed that a mutation at position 627 in the PB2 protein influenced the outcome of infection in mice. Moreover, high cleavability of the hemagglutinin glycoprotein was an essential requirement for lethal infection.

Naoko Iwata-Yoshikawa,  Tadashi Okamura,  Yukiko Shimizu … (2019)
Broad-spectrum antiviral drugs against highly pathogenic coronaviruses and other emerging viruses are desirable to enable a rapid response to pandemic threats. Transmembrane protease serine type 2 (TMPRSS2), a protease belonging to the type II transmembrane serine protease family, cleaves the coronavirus spike protein, making it a potential therapeutic target for coronavirus infections. Here, we examined the role of TMPRSS2 using animal models of SARS-CoV and MERS-CoV infection. The results suggest that lack of TMPRSS2 in the airways reduces the severity of lung pathology after infection by SARS-CoV and MERS-CoV. Taken together, the results will facilitate development of novel targets for coronavirus therapy.

Elodie Crublet,  Marie-Christine Vaney,  F Rey … (2010)
Chikungunya virus (CHIKV) is an emerging mosquito-borne alphavirus that has caused widespread outbreaks of debilitating human disease in the past five years. CHIKV invasion of susceptible cells is mediated by two viral glycoproteins, E1 and E2, which carry the main antigenic determinants and form an icosahedral shell at the virion surface. Glycoprotein E2, derived from furin cleavage of the p62 precursor into E3 and E2, is responsible for receptor binding, and E1 for membrane fusion. In the context of a concerted multidisciplinary effort to understand the biology of CHIKV, here we report the crystal structures of the precursor p62-E1 heterodimer and of the mature E3-E2-E1 glycoprotein complexes. The resulting atomic models allow the synthesis of a wealth of genetic, biochemical, immunological and electron microscopy data accumulated over the years on alphaviruses in general. This combination yields a detailed picture of the functional architecture of the 25 MDa alphavirus surface glycoprotein shell. Together with the accompanying report on the structure of the Sindbis virus E2-E1 heterodimer at acidic pH (ref. 3), this work also provides new insight into the acid-triggered conformational change on the virus particle and its inbuilt inhibition mechanism in the immature complex.