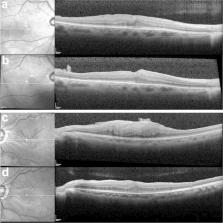 We evaluated predictive factors for visual outcomes in patients with idiopathic epiretinal membrane (iERM) after pars plana vitrectomy (PPV). Clinical records for 114 eyes (114 patients, mean age: 70.6 years) with iERM treated by PPV between March 2012 and March 2018 were retrospectively reviewed. Overall, the mean postoperative best-corrected visual acuity (BCVA) and central retinal thickness measured by optical coherence tomography improved as early as 1 month after surgery, and further improved until 3 months (P < 0.01). Multiple linear regression analyses adjusted for the preoperative BCVA showed that older age (B, 0.010; 95% confidence interval, 0.003 to 0.016; P = 0.003) and a shorter axial length (AL; B, −0.059; 95% confidence interval, −0.099 to −0.019; P = 0.005) predicted worse postoperative BCVA. The Mann-Whitney U test showed that the postoperative BCVA was worse in eyes with AL < 23.6 mm than in eyes with AL ≥ 23.6 mm (P = 0.037), and in patients aged ≥69 years than in patients aged <69 years (P = 0.024). The findings may help in evaluating surgical indications for each patient to obtain satisfactory outcomes, irrespective of the preoperative BCVA.

Aging of the human photoreceptor mosaic: evidence for selective vulnerability of rods in central retina.

Jonathan Allen,  R Kalina,  B. Curcio … (1993)
Because previous studies suggested degeneration and loss of photoreceptors in aged human retina, the spatial density of cones and rods subserving the central 43 degrees of vision as a function of age was determined. Cones and rods were counted in 27 whole mounted retinas from donors aged 27 to 90 years with macroscopically normal fundi. Photoreceptor topography was analyzed with new graphic and statistical techniques. Changes in cone density throughout this age span showed no consistent relationship to age or retinal location, and the total number of foveal cones was remarkably stable. In contrast, rod density decreased by 30%, beginning inferior to the fovea in midlife and culminating in an annulus of deepest loss at 0.5 to 3 mm eccentricity by the ninth decade. Space vacated by dying rods was filled in by larger rod inner segments, resulting in a similar rod coverage at all ages. At the temporal equator, cone density declined by 23%, but rods were stable throughout adulthood. The stability of both rod coverage and rhodopsin content despite decreasing cell number suggests plasticity of the adult rod system and that age-related declines in scotopic sensitivity may be due to postreceptoral factors. There is no evidence for the massive loss of foveal cones required to explain even modest decrements in acuity, consistent with evidence that visual deficits at high photopic levels may be largely due to optical factors. Why the rods of central retina, which share a common support system and light exposure with the neighboring cones, are preferentially vulnerable to aging remains to be determined.

Predictors of Functional and Anatomic Outcomes in Patients with Diabetic Macular Edema Treated with Ranibizumab.