Mir-34: A New Weapon Against Cancer? 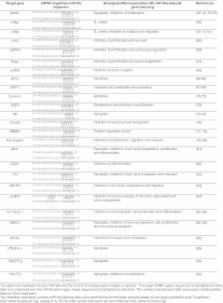 The microRNA(miRNA)-34a is a key regulator of tumor suppression. It controls the expression of a plethora of target proteins involved in cell cycle, differentiation and apoptosis, and antagonizes processes that are necessary for basic cancer cell viability as well as cancer stemness, metastasis, and chemoresistance. In this review, we focus on the molecular mechanisms of miR-34a-mediated tumor suppression, giving emphasis on the main miR-34a targets, as well as on the principal regulators involved in the modulation of this miRNA. Moreover, we shed light on the miR-34a role in modulating responsiveness to chemotherapy and on the phytonutrients-mediated regulation of miR-34a expression and activity in cancer cells. Given the broad anti-oncogenic activity of miR-34a, we also discuss the substantial benefits of a new therapeutic concept based on nanotechnology delivery of miRNA mimics. In fact, the replacement of oncosuppressor miRNAs provides an effective strategy against tumor heterogeneity and the selective RNA-based delivery systems seems to be an excellent platform for a safe and effective targeting of the tumor.

Ramiro Garzon,  Guido Marcucci,  Carlo Croce (2010)
MicroRNAs (miRNAs) are evolutionarily conserved small non-coding RNAs that regulate gene expression. Early studies have shown that miRNA expression is deregulated in cancer and experimental data indicate that cancer phenotypes can be modified by targeting miRNA expression. Based on these observations, miRNA-based anticancer therapies are being developed, either alone or in combination with current targeted therapies, with the goal to improve disease response and increase cure rates. The advantage of using miRNA approaches is based on its ability to concurrently target multiple effectors of pathways involved in cell differentiation, proliferation and survival. In this Review, we describe the role of miRNAs in tumorigenesis and critically discuss the rationale, the strategies and the challenges for the therapeutic targeting of miRNAs in cancer.

Can Liu,  Kevin Kelnar,  Bigang Liu … (2011)
Cancer stem cells (CSCs) or tumor progenitor cells are involved in tumor progression and metastasis1. MicroRNAs (miRNAs) regulate both normal stem cells and CSCs2–5 and miRNA dysregulation has been implicated in tumorigenesis6. CSCs in many tumors, including cancers of the breast7, pancreas8, head and neck9, colon10,11, small intestine12, liver13, stomach14, bladder15, and ovary16 have been identified using adhesion molecule CD44, either individually or in combination with other marker(s). Prostate cancer (PCa) stem/progenitor cells with enhanced clonogenic17 and tumor-initiating and metastatic18,19 capacities are also enriched in the CD44+ cell population, but whether miRNAs regulate the CD44+ PCa cells and PCa metastasis remains unclear. Here we show, through expression analysis, that miR-34a, a p53 target20–24, was under-expressed in CD44+ PCa cells purified from xenograft and primary tumors. Enforced expression of miR-34a in bulk PCa cells inhibited clonogenic expansion and tumor development. miR-34a re-expression in CD44+ PCa cells blocked whereas miR-34a antagomirs in CD44− PCa cells promoted tumor regeneration and metastasis. Systemically delivered miR-34a inhibited PCa metastasis and extended animal survival. Of significance, CD44 was identified and validated as a direct and functional target of miR-34a and CD44 knockdown phenocopied miR-34a over-expression in inhibiting PCa regeneration and metastasis. Our study reveals miR-34a as a critical negative regulator of CD44+ PCa cells and establishes a strong rationale for developing miR-34a as a novel therapeutic against prostate CSCs.

Fred N. Davis,  Aaron C Hilyard,  G Lagna … (2008)
MicroRNAs (miRNAs) are small non-coding RNAs that participate in the spatiotemporal regulation of messenger RNA and protein synthesis. Aberrant miRNA expression leads to developmental abnormalities and diseases, such as cardiovascular disorders and cancer; however, the stimuli and processes regulating miRNA biogenesis are largely unknown. The transforming growth factor beta (TGF-beta) and bone morphogenetic protein (BMP) family of growth factors orchestrates fundamental biological processes in development and in the homeostasis of adult tissues, including the vasculature. Here we show that induction of a contractile phenotype in human vascular smooth muscle cells by TGF-beta and BMPs is mediated by miR-21. miR-21 downregulates PDCD4 (programmed cell death 4), which in turn acts as a negative regulator of smooth muscle contractile genes. Surprisingly, TGF-beta and BMP signalling promotes a rapid increase in expression of mature miR-21 through a post-transcriptional step, promoting the processing of primary transcripts of miR-21 (pri-miR-21) into precursor miR-21 (pre-miR-21) by the DROSHA (also known as RNASEN) complex. TGF-beta- and BMP-specific SMAD signal transducers are recruited to pri-miR-21 in a complex with the RNA helicase p68 (also known as DDX5), a component of the DROSHA microprocessor complex. The shared cofactor SMAD4 is not required for this process. Thus, regulation of miRNA biogenesis by ligand-specific SMAD proteins is critical for control of the vascular smooth muscle cell phenotype and potentially for SMAD4-independent responses mediated by the TGF-beta and BMP signalling pathways.