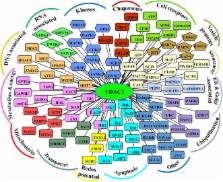 Cancer cells share several properties, high proliferation potential, reprogramed metabolism, and resistance to apoptotic cues. Acquiring these hallmarks involves changes in key oncogenes and non-oncogenes essential for cancer cell survival and prosperity, and is accompanied by the increased energy requirements of proliferating cells. Mitochondria occupy a central position in cell life and death with mitochondrial bioenergetics, biosynthesis, and signaling are critical for tumorigenesis. Voltage-dependent anion channel 1 (VDAC1) is situated in the outer mitochondrial membrane (OMM) and serving as a mitochondrial gatekeeper. VDAC1 allowing the transfer of metabolites, fatty acid ions, Ca 2+, reactive oxygen species, and cholesterol across the OMM and is a key player in mitochondrial-mediate apoptosis. Moreover, VDAC1 serves as a hub protein, interacting with diverse sets of proteins from the cytosol, endoplasmic reticulum, and mitochondria that together regulate metabolic and signaling pathways. The observation that VDAC1 is over-expressed in many cancers suggests that the protein may play a pivotal role in cancer cell survival. However, VDAC1 is also important in mitochondria-mediated apoptosis, mediating release of apoptotic proteins and interacting with anti-apoptotic proteins, such as B-cell lymphoma 2 (Bcl-2), Bcl-xL, and hexokinase (HK), which are also highly expressed in many cancers. Strategically located in a “bottleneck” position, controlling metabolic homeostasis and apoptosis, VDAC1 thus represents an emerging target for anti-cancer drugs. This review presents an overview on the multi-functional mitochondrial protein VDAC1 performing several functions and interacting with distinct sets of partners to regulate both cell life and death, and highlights the importance of the protein for cancer cell survival. We address recent results related to the mechanisms of VDAC1-mediated apoptosis and the potential of associated proteins to modulate of VDAC1 activity, with the aim of developing VDAC1-based approaches. The first strategy involves modification of cell metabolism using VDAC1-specific small interfering RNA leading to inhibition of cancer cell and tumor growth and reversed oncogenic properties. The second strategy involves activation of cancer cell death using VDAC1-based peptides that prevent cell death induction by anti-apoptotic proteins. Finally, we discuss the potential therapeutic benefits of treatments and drugs leading to enhanced VDAC1 expression or targeting VDAC1 to induce apoptosis.

Moritz von Winterfeld,  J Boniface,  Sudhir Sahasrabudhe … (2007)
Therapeutics that discriminate between the genetic makeup of normal cells and tumour cells are valuable for treating and understanding cancer. Small molecules with oncogene-selective lethality may reveal novel functions of oncoproteins and enable the creation of more selective drugs. Here we describe the mechanism of action of the selective anti-tumour agent erastin, involving the RAS-RAF-MEK signalling pathway functioning in cell proliferation, differentiation and survival. Erastin exhibits greater lethality in human tumour cells harbouring mutations in the oncogenes HRAS, KRAS or BRAF. Using affinity purification and mass spectrometry, we discovered that erastin acts through mitochondrial voltage-dependent anion channels (VDACs)--a novel target for anti-cancer drugs. We show that erastin treatment of cells harbouring oncogenic RAS causes the appearance of oxidative species and subsequent death through an oxidative, non-apoptotic mechanism. RNA-interference-mediated knockdown of VDAC2 or VDAC3 caused resistance to erastin, implicating these two VDAC isoforms in the mechanism of action of erastin. Moreover, using purified mitochondria expressing a single VDAC isoform, we found that erastin alters the permeability of the outer mitochondrial membrane. Finally, using a radiolabelled analogue and a filter-binding assay, we show that erastin binds directly to VDAC2. These results demonstrate that ligands to VDAC proteins can induce non-apoptotic cell death selectively in some tumour cells harbouring activating mutations in the RAS-RAF-MEK pathway.

Jonathan J. Wilson (2003)
The first step in metabolism of glucose (Glc) is usually phosphorylation, catalyzed by hexokinase. However, the Glc-6-P produced can then enter one or more of several alternative pathways. Selective expression of isozymic forms of hexokinase, differing in catalytic and regulatory properties as well as subcellular localization, is likely to be an important factor in determining the pattern of Glc metabolism in mammalian tissues/cells. Despite their overall structural similarity, the Type I, Type II and Type III isozymes differ in important respects. All three isozymes are inhibited by the product, Glc-6-P, but with the Type I isozyme, this inhibition is antagonized by P(I), whereas with the Type II and Type III isozymes, P(i) actually causes additional inhibition. Reciprocal changes in intracellular levels of Glc-6-P and P(i) are closely associated with cellular energy status, and it is proposed that the response of the Type I isozyme to these effectors adapts it for catabolic function, introducing Glc into glycolytic metabolism for energy production. In contrast, the Type II, and probably the Type III, isozymes are suggested to serve primarily anabolic functions, e.g. to provide Glc-6-P for glycogen synthesis or metabolism via the pentose phosphate pathway for lipid synthesis. Type I hexokinase binds to mitochondria through interaction with porin, the protein that forms channels through which metabolites traverse the outer mitochondrial membrane. Several experimental approaches have led to the conclusion that the Type I isozyme, bound to actively phosphorylating mitochondria, selectively uses intramitochondrial ATP as substrate. Such interactions are thought to facilitate coordination of the introduction of Glc into glycolysis, via the hexokinase reaction, with the terminal oxidative stages of Glc metabolism occurring in the mitochondria, thus ensuring an overall rate of Glc metabolism commensurate with cellular energy demands and avoiding excessive production of lactate. The Type II isozyme also binds to mitochondria. Whether such coupling occurs with mitochondrially bound Type II hexokinase in normal tissues, and how it might be related to the proposed anabolic role of this isozyme, remain to be determined. The Type III isozyme lacks the hydrophobic N-terminal sequence known to be critical for binding of the Type I and Type II isozymes to mitochondria. Immunolocalization studies have indicated that, in many cell types, the Type III has a perinuclear localization, the possible metabolic consequences of which remain unclear.

1Department of Life Sciences, National Institute for Biotechnology in the Negev, Ben-Gurion University of the Negev , Beer-Sheva, Israel

Specialty section: This article was submitted to Molecular and Cellular Oncology, a section of the journal Frontiers in Oncology