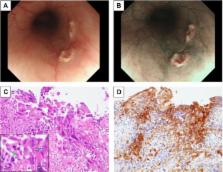 A 76-year-old Japanese woman presented to our hospital with anorexia. Two years before, she was diagnosed with non-Hodgkin’s lymphoma and had received ten cycles of systemic chemotherapy. After salvage chemotherapy with bendamustine and rituximab (B–R), bone marrow suppression had lasted >3 months. Esophagogastroscopy revealed polynesic white protrusions in the mid-esophagus. These lesions were diagnosed as herpetic esophagitis. To the best of our knowledge, there is no other report in which herpetic esophagitis has been documented as an adverse event of B–R regimen. Because the complication could cause symptomatic gastrointestinal discomfort, physicians should be aware of this disease.

Randomized trial of bendamustine-rituximab or R-CHOP/R-CVP in first-line treatment of indolent NHL or MCL: the BRIGHT study.

Ian W Flinn,  Richard van der Jagt,  Brad Kahl … (2014)
This randomized, noninferiority (NI), global, phase 3 study evaluated the efficacy and safety of bendamustine plus rituximab (BR) vs a standard rituximab-chemotherapy regimen (rituximab plus cyclophosphamide, doxorubicin, vincristine, and prednisone [R-CHOP] or rituximab plus cyclophosphamide, vincristine, and prednisone [R-CVP]) for treatment-naive patients with indolent non-Hodgkin's lymphoma or mantle cell lymphoma. Investigators preassigned the standard treatment regimen they considered most appropriate for each patient; patients were randomized to receive BR (n = 224) or standard therapy (R-CHOP/R-CVP, n = 223) for 6 cycles; 2 additional cycles were permitted at investigator discretion. Response was assessed by a blinded independent review committee. BR was noninferior to R-CHOP/R-CVP, as assessed by the primary end point of complete response rate (31% vs 25%, respectively; P = .0225 for NI [0.88 margin]). The overall response rates for BR and R-CHOP/R-CVP were 97% and 91%, respectively (P = .0102). Incidences of vomiting and drug-hypersensitivity reactions were significantly higher in patients treated with BR (P < .05), and incidences of peripheral neuropathy/paresthesia and alopecia were significantly higher in patients treated with standard-therapy regimens (P < .05). These data indicate BR is noninferior to standard therapy with regard to clinical response with an acceptable safety profile. This trial was registered at www.clinicaltrials.gov as #NCT00877006.

Nishant Tageja,  Jasdeepa Nagi (2010)
Bendamustine (Treanda, Ribomustin) is a water-soluble, bifunctional chemotherapeutic agent that also has potential antimetabolite properties and only partial cross-resistance with other alkylators. Designed in 1963 and re-discovered in 1990s, this drug's unique mechanism of action and favorable side-effect profile promise a major role in the management of lymphoproliferative disorders. Bendamustine has been designated as an orphan drug in the United States, conferring prolonged market exclusivity. This article provides a comprehensive review of the data on efficacy and toxicity from trials investigating the use of bendamustine for the treatment of lymphoproliferative neoplasms. The pharmacology, pharmacokinetics, and pre-clinical studies with bendamustine are also reviewed. MEDLINE and Pubmed databases (1970-2010) were searched using the terms bendamustine, bendamustin, Treanda, Ribomustin, SDX-105, IMET-3393, and Cytostasan. All relevant articles were reviewed and references screened for additional articles. The databases of the American Society of Hematology (2004-2009) and the American Society of Clinical Oncology (1995-2009) were also searched for relevant abstracts. Bendamustine induces a remission in more than three-fourths of patients with rituximab-refractory indolent B cell non-Hodgkin lymphoma (NHL). Combined with rituximab in vitro, bendamustine shows synergistic effects against various leukemia and lymphoma cell lines. Clinical trials supporting these results show that bendamustine plus rituximab is highly effective in patients with relapsed-refractory indolent lymphoma, inducing remissions in 90% or more and a median progression-free survival of 23-24 months. Bendamustine has been reasonably well tolerated in clinical trials with low propensity to induce alopecia. Combination of bendamustine and rituximab has the potential to become a new standard first-line treatment option for patients with FL, MCL, and indolent lymphomas. Results of ongoing trials will help to further elucidate the optimal role of bendamustine in indolent NHL.