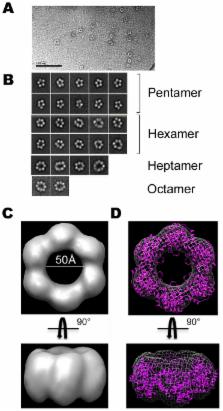 Rift Valley fever virus (RVFV), a Phlebovirus with a genome consisting of three single-stranded RNA segments, is spread by infected mosquitoes and causes large viral outbreaks in Africa. RVFV encodes a nucleoprotein (N) that encapsidates the viral RNA. The N protein is the major component of the ribonucleoprotein complex and is also required for genomic RNA replication and transcription by the viral polymerase. Here we present the 1.6 Å crystal structure of the RVFV N protein in hexameric form. The ring-shaped hexamers form a functional RNA binding site, as assessed by mutagenesis experiments. Electron microscopy (EM) demonstrates that N in complex with RNA also forms rings in solution, and a single-particle EM reconstruction of a hexameric N-RNA complex is consistent with the crystallographic N hexamers. The ring-like organization of the hexamers in the crystal is stabilized by circular interactions of the N terminus of RVFV N, which forms an extended arm that binds to a hydrophobic pocket in the core domain of an adjacent subunit. The conformation of the N-terminal arm differs from that seen in a previous crystal structure of RVFV, in which it was bound to the hydrophobic pocket in its own core domain. The switch from an intra- to an inter-molecular interaction mode of the N-terminal arm may be a general principle that underlies multimerization and RNA encapsidation by N proteins from Bunyaviridae. Furthermore, slight structural adjustments of the N-terminal arm would allow RVFV N to form smaller or larger ring-shaped oligomers and potentially even a multimer with a super-helical subunit arrangement. Thus, the interaction mode between subunits seen in the crystal structure would allow the formation of filamentous ribonucleocapsids in vivo. Both the RNA binding cleft and the multimerization site of the N protein are promising targets for the development of antiviral drugs.

The Rift Valley fever virus (RVFV), a negative strand RNA virus spread by infected mosquitoes, affects livestock and humans who can develop a severe disease. We studied the structure of its nucleoprotein (N), which forms a filamentous coat that protects the viral RNA genome and is also required for RNA replication and transcription by the polymerase of the virus. We report the structure of the RVFV N protein at 1.6 Å resolution, which reveals hexameric rings with an external diameter of 100 Å that are formed by exchanges of N-terminal arms between the nearest neighbors. Electron microscopy of recombinant protein in complex with RNA shows that N also forms rings in solution. A reconstruction of the hexameric ring at 25 Å resolution is consistent with the hexamer structure determined by crystallography. We propose that slight structural variations would suffice to convert a ring-shaped oligomer into subunits with a super-helical arrangement and that this mode of protein-protein association forms the basis for the formation of filamentous ribonucleocapsids by this virus family. Both the RNA binding cleft and the multimerization site of the N protein can be targeted for the development of drugs against RVFV.

ESPript/ENDscript: Extracting and rendering sequence and 3D information from atomic structures of proteins.

Emmanuel Courcelle,  Xavier Robert,  Patrice Gouet (2003)
The fortran program ESPript was created in 1993, to display on a PostScript figure multiple sequence alignments adorned with secondary structure elements. A web server was made available in 1999 and ESPript has been linked to three major web tools: ProDom which identifies protein domains, PredictProtein which predicts secondary structure elements and NPS@ which runs sequence alignment programs. A web server named ENDscript was created in 2002 to facilitate the generation of ESPript figures containing a large amount of information. ENDscript uses programs such as BLAST, Clustal and PHYLODENDRON to work on protein sequences and such as DSSP, CNS and MOLSCRIPT to work on protein coordinates. It enables the creation, from a single Protein Data Bank identifier, of a multiple sequence alignment figure adorned with secondary structure elements of each sequence of known 3D structure. Similar 3D structures are superimposed in turn with the program PROFIT and a final figure is drawn with BOBSCRIPT, which shows sequence and structure conservation along the Calpha trace of the query. ESPript and ENDscript are available at http://genopole.toulouse.inra.fr/ESPript.

Melanie D. Ohi,  Ying Li,  Yifan Cheng … (2004)
Vitrification is the state-of-the-art specimen preparation technique for molecular electron microscopy (EM) and therefore negative staining may appear to be an outdated approach. In this paper we illustrate the specific advantages of negative staining, ensuring that this technique will remain an important tool for the study of biological macromolecules. Due to the higher image contrast, much smaller molecules can be visualized by negative staining. Also, while molecules prepared by vitrification usually adopt random orientations in the amorphous ice layer, negative staining tends to induce preferred orientations of the molecules on the carbon support film. Combining negative staining with image classification techniques makes it possible to work with very heterogeneous molecule populations, which are difficult or even impossible to analyze using vitrified specimens.

Use of non-crystallographic symmetry in protein structure refinement.

G Kleywegt (1996)
Several methods to assess the (dis)similarity of protein structures objectively are described, some of which, when applied to non-crystallographically related protein models, are able to discriminate between significant differences and 'random noise'. Some of these methods have been used to investigate a sample of several hundred protein structures which have been solved by means of X-ray crystallography in order to investigate the extent to which non-crystallographically related protein models differ from one another. It is shown that the extent of such differences is largely dependent on the resolution of the data used for the determination and refinement of the structure and, measured by some statistics, even varies essentially linearly with the resolution. The implications of these findings for the strategies used to refine structures with non-crystallographic symmetry, in particular at low resolution, are discussed. Finally, two examples are given of recent structure determinations from this laboratory in which the presence (and employment) of non-crystallographic symmetry was crucial to the solution and refinement of the structure.

Publisher ID: PPATHOGENS-D-10-00546
DOI: 10.1371/journal.ppat.1002030
PMC ID: 3093367
PubMed ID: 21589902
Copyright statement: Ferron et al. This is an open-access article distributed under the terms of the Creative Commons Attribution License, which permits unrestricted use, distribution, and reproduction in any medium, provided the original author and source are credited.