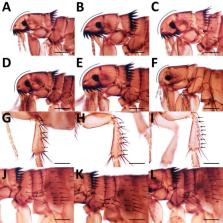 To provide data that can be used to inform treatment and prevention strategies for zoonotic pathogens in animal and human populations, we assessed the occurrence of zoonotic pathogens and their vectors on 2,381 client-owned dogs and cats living in metropolitan areas of 8 countries in eastern and Southeast Asia during 2017–2018. Overall exposure to ectoparasites was 42.4% in dogs and 31.3% in cats. Our data cover a wide geographic distribution of several pathogens, including Leishmania infantum and zoonotic species of filariae, and of animals infested with arthropods known to be vectors of zoonotic pathogens. Because dogs and cats share a common environment with humans, they are likely to be key reservoirs of pathogens that infect persons in the same environment. These results will help epidemiologists and policy makers provide tailored recommendations for future surveillance and prevention strategies.

Richard Coker,  Benjamin Hunter,  James W Rudge … (2011)
Summary Southeast Asia is a hotspot for emerging infectious diseases, including those with pandemic potential. Emerging infectious diseases have exacted heavy public health and economic tolls. Severe acute respiratory syndrome rapidly decimated the region's tourist industry. Influenza A H5N1 has had a profound effect on the poultry industry. The reasons why southeast Asia is at risk from emerging infectious diseases are complex. The region is home to dynamic systems in which biological, social, ecological, and technological processes interconnect in ways that enable microbes to exploit new ecological niches. These processes include population growth and movement, urbanisation, changes in food production, agriculture and land use, water and sanitation, and the effect of health systems through generation of drug resistance. Southeast Asia is home to about 600 million people residing in countries as diverse as Singapore, a city state with a gross domestic product (GDP) of US$37 500 per head, and Laos, until recently an overwhelmingly rural economy, with a GDP of US$890 per head. The regional challenges in control of emerging infectious diseases are formidable and range from influencing the factors that drive disease emergence, to making surveillance systems fit for purpose, and ensuring that regional governance mechanisms work effectively to improve control interventions.

Filipe Dantas-Torres,  Maria Stefania Latrofa,  Giada Annoscia … (2013)
Background The taxonomic status of the brown dog tick (Rhipicephalus sanguineus sensu stricto), which has long been regarded as the most widespread tick worldwide and a vector of many pathogens to dogs and humans, is currently under dispute. Methods We conducted a comprehensive morphological and genetic study of 278 representative specimens, which belonged to different species (i.e., Rhipicephalus bursa, R. guilhoni, R. microplus, R. muhsamae, R. pusillus, R. sanguineus sensu lato, and R. turanicus) collected from Europe, Asia, Americas, and Oceania. After detailed morphological examination, ticks were molecularly processed for the analysis of partial mitochondrial (16S rDNA, 12S rDNA, and cox1) gene sequences. Results In addition to R. sanguineus s.l. and R. turanicus, three different operational taxonomic units (namely, R. sp. I, R. sp. II, and R. sp. III) were found on dogs. These operational taxonomical units were morphologically and genetically different from R. sanguineus s.l. and R. turanicus. Ticks identified as R. sanguineus s.l., which corresponds to the so-called “tropical species” (=northern lineage), were found in all continents and genetically it represents a sister group of R. guilhoni. R. turanicus was found on a wide range of hosts in Italy and also on dogs in Greece. Conclusions The tropical species and the temperate species (=southern lineage) are paraphyletic groups. The occurrence of R. turanicus in the Mediterranean region is confirmed. A consensual re-description of R. sanguineus s.s. and R. turanicus will be necessary to solve the taxonomic problems within the so-called R. sanguineus group.