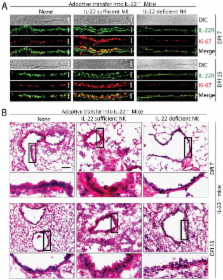 Influenza infection primarily targets the upper respiratory system, leading to a severe destruction of the epithelial cell layer. The role of immune cells in the regeneration of tracheal and bronchial epithelial cells is not well defined. Here, we investigated the production of pro-constructive cytokine, Interleukin-22 (IL-22), in the bronchoalveolar lavage (BAL), trachea, lung tissue, and spleen during influenza infection. We found that conventional NK cells (NCR1 +NK1.1 +CD127 −RORγt −) were the predominant IL-22-producers in the BAL, trachea and lung tissues. Tracheal epithelial cells constitutively expressed high levels of IL-22R and underwent active proliferation in response to IL-22 in the wild type (WT) mice. Infection of IL-22 −/− mice with influenza virus resulted in a severe impairment in the regeneration of tracheal epithelial cells. In addition, IL-22 −/− mice continued to lose body weight even after 10 days post infection (DPI 10) without any recovery. Tracheal epithelial cell proliferation was significantly reduced in IL-22 −/− mice during influenza infection. Adoptive transfer of IL-22 sufficient but not IL-22 deficient NK cells into IL-22 −/− mice restored the tracheal/bronchial epithelial cell regeneration and conferred protection against inflammation. Our findings strongly suggest that conventional NK cells have evolved to both kill virus-infected cells and also to provide vital cytokines for tissue regeneration.

Basal cells as stem cells of the mouse trachea and human airway epithelium.

Yan-xue Xue,  P. Clark,  Emma L. Rawlins … (2009)
The pseudostratified epithelium of the mouse trachea and human airways contains a population of basal cells expressing Trp-63 (p63) and cytokeratins 5 (Krt5) and Krt14. Using a KRT5-CreER(T2) transgenic mouse line for lineage tracing, we show that basal cells generate differentiated cells during postnatal growth and in the adult during both steady state and epithelial repair. We have fractionated mouse basal cells by FACS and identified 627 genes preferentially expressed in a basal subpopulation vs. non-BCs. Analysis reveals potential mechanisms regulating basal cells and allows comparison with other epithelial stem cells. To study basal cell behaviors, we describe a simple in vitro clonal sphere-forming assay in which mouse basal cells self-renew and generate luminal cells, including differentiated ciliated cells, in the absence of stroma. The transcriptional profile identified 2 cell-surface markers, ITGA6 and NGFR, which can be used in combination to purify human lung basal cells by FACS. Like those from the mouse trachea, human airway basal cells both self-renew and generate luminal daughters in the sphere-forming assay.

Tatyana Y Matrosovich,  Hans-Peter Klenk,  M N Matrosovich … (2004)
The recent human infections caused by H5N1, H9N2, and H7N7 avian influenza viruses highlighted the continuous threat of new pathogenic influenza viruses emerging from a natural reservoir in birds. It is generally believed that replication of avian influenza viruses in humans is restricted by a poor fit of these viruses to cellular receptors and extracellular inhibitors in the human respiratory tract. However, detailed mechanisms of this restriction remain obscure. Here, using cultures of differentiated human airway epithelial cells, we demonstrated that influenza viruses enter the airway epithelium through specific target cells and that there were striking differences in this respect between human and avian viruses. During the course of a single-cycle infection, human viruses preferentially infected nonciliated cells, whereas avian viruses as well as the egg-adapted human virus variant with an avian virus-like receptor specificity mainly infected ciliated cells. This pattern correlated with the predominant localization of receptors for human viruses (2-6-linked sialic acids) on nonciliated cells and of receptors for avian viruses (2-3-linked sialic acids) on ciliated cells. These findings suggest that although avian influenza viruses can infect human airway epithelium, their replication may be limited by a nonoptimal cellular tropism. Our data throw light on the mechanisms of generation of pandemic viruses from their avian progenitors and open avenues for cell level-oriented studies on the replication and pathogenicity of influenza virus in humans.