Modeling of the mechano-chemical behaviour of the nuclear pore complex: current research and perspectives 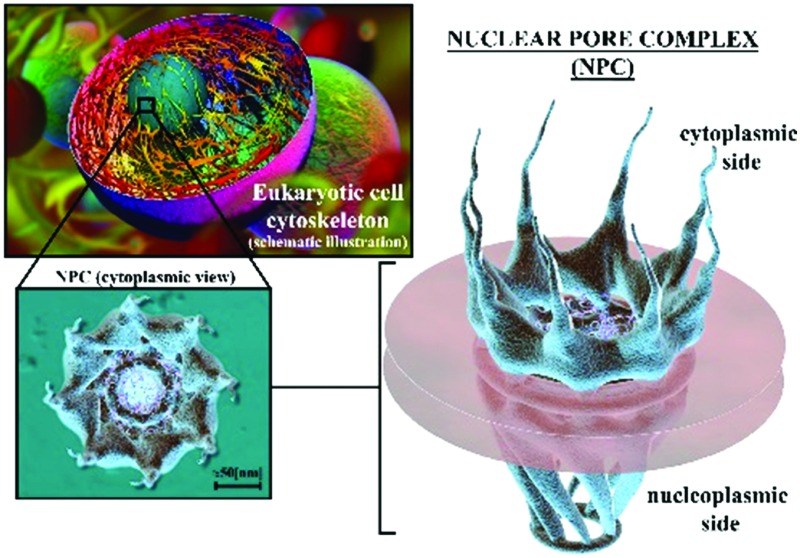 This review opens the door to the consideration of how mechanosensing and mechanotransduction can affect the nanomechanics of the NPC.

Recent evidence suggests that mechanical deformation of the cell nucleus regulates the nuclear import of the transcriptional activators of genes involved in primary physiological cell responses such as stem cell differentiation. In addition, this nuclear mechanosensing response is de-regulated in pathological states, such as cancer and neurodegeneration. One hypothesis that could greatly advance the field is that the deformation of the nuclear envelope activates nuclear pore complexes through a direct mechanical link. The understanding of this possible mechanism for nuclear pore complex stretch-activation entails studying the mechanical connection of this complex to the nuclear envelope at the nanoscale. The nanomechanics of the nuclear pore complex is thus emerging as a novel research field, bridging nanoscience with nanotechnology. This review examines the frontier of research methodologies that are potentially useful for building a computational model of this interaction. This includes, for example, electron tomography to assess the geometrical features of the nuclear pore complex and nanoindentation to estimate its mechanical properties and that of the nuclear envelope. In order to summarize the state-of-the-art and perspectives in the field of NPC nanomechanics, this review covers highly interdisciplinary experimental and theoretical research methodologies pertaining to the fields of physics, chemistry, biology, materials and mechanics.

Reviews of mathematical modeling in cancer

Tensional homeostasis and the malignant phenotype.

Cells lying on a bed of microneedles: an approach to isolate mechanical force.

Shuai Chen,  Dana Pirone,  Eric Tan … (2003)
We describe an approach to manipulate and measure mechanical interactions between cells and their underlying substrates by using microfabricated arrays of elastomeric, microneedle-like posts. By controlling the geometry of the posts, we varied the compliance of the substrate while holding other surface properties constant. Cells attached to, spread across, and deflected multiple posts. The deflections of the posts occurred independently of neighboring posts and, therefore, directly reported the subcellular distribution of traction forces. We report two classes of force-supporting adhesions that exhibit distinct force-size relationships. Force increased with size of adhesions for adhesions larger than 1 microm(2), whereas no such correlation existed for smaller adhesions. By controlling cell adhesion on these micromechanical sensors, we showed that cell morphology regulates the magnitude of traction force generated by cells. Cells that were prevented from spreading and flattening against the substrate did not contract in response to stimulation by serum or lysophosphatidic acid, whereas spread cells did. Contractility in the unspread cells was rescued by expression of constitutively active RhoA. Together, these findings demonstrate a coordination of biochemical and mechanical signals to regulate cell adhesion and mechanics, and they introduce the use of arrays of mechanically isolated sensors to manipulate and measure the mechanical interactions of cells.

Mechanotransduction at a distance: mechanically coupling the extracellular matrix with the nucleus.

Jessica Tytell,  Donald E. Ingber,  Ning Wang (2008)
Research in cellular mechanotransduction often focuses on how extracellular physical forces are converted into chemical signals at the cell surface. However, mechanical forces that are exerted on surface-adhesion receptors, such as integrins and cadherins, are also channelled along cytoskeletal filaments and concentrated at distant sites in the cytoplasm and nucleus. Here, we explore the molecular mechanisms by which forces might act at a distance to induce mechanochemical conversion in the nucleus and alter gene activities.

This is an Open Access article distributed under the terms of the Creative Commons Attribution-NonCommercial 3.0 Unported License ( http://creativecommons.org/licenses/by-nc/3.0/) which permits unrestricted non-commercial use, distribution, and reproduction in any medium, provided the original work is properly cited.