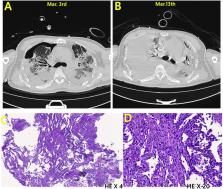 Yayoi Inokoshi,  Yoshinori Tanino,  Xintao Wang … (2013)
Hyaluronan is an important constituent of the extracellular matrix in lungs, and growing evidence demonstrates its important biological properties in the lung. However, its role in interstitial pneumonia remains to be fully clarified. The goal of this study was to clarify the role of hyaluronan in interstitial pneumonia.