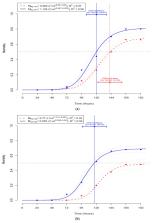 Pandora neoaphidis and Entomophthora planchoniana (phylum Entomophthoromycota) are important fungal pathogens on cereal aphids, Sitobion avenae and Rhopalosiphum padi. Here, we evaluated and compared for the first time the virulence of these two fungi, both produced in S. avenae cadavers, against the two aphid species subjected to the same exposure. Two laboratory bioassays were carried out using a method imitating entomophthoralean transmission in the field. Healthy colonies of the two aphid species were exposed to the same conidial shower of P. neoaphidis or E. planchoniana, in both cases from a cadaver of S. avenae. The experiments were performed under LD 18:6 h at 21 °C and a successful transmission was monitored for a period of nine days after initial exposure. Susceptibility of both S. avenae and R. padi to fungal infection showed a sigmoid trend. The fitted nonlinear model showed that the conspecific host, S. avenae, was more susceptible to E. planchoniana infection than the heterospecific host R. padi, was. In the case of P. neoaphidis, LT 50 for S. avenae was 5.0 days compared to 5.9 days for R. padi. For E. planchoniana, the LT 50 for S. avenae was 4.9 days, while the measured infection level in R. padi was always below 50 percent. Our results suggest that transmission from conspecific aphid host to heterospecific aphid host can occur in the field, but with expected highest transmission success to the conspecific host.

Insect pathogens as biological control agents: Back to the future.

L A Lacey,  D Grzywacz,  D I Shapiro-Ilan … (2015)
The development and use of entomopathogens as classical, conservation and augmentative biological control agents have included a number of successes and some setbacks in the past 1years. In this forum paper we present current information on development, use and future directions of insect-specific viruses, bacteria, fungi and nematodes as components of integrated pest management strategies for control of arthropod pests of crops, forests, urban habitats, and insects of medical and veterinary importance. Insect pathogenic viruses are a fruitful source of microbial control agents (MCAs), particularly for the control of lepidopteran pests. Most research is focused on the baculoviruses, important pathogens of some globally important pests for which control has become difficult due to either pesticide resistance or pressure to reduce pesticide residues. Baculoviruses are accepted as safe, readily mass produced, highly pathogenic and easily formulated and applied control agents. New baculovirus products are appearing in many countries and gaining an increased market share. However, the absence of a practical in vitro mass production system, generally higher production costs, limited post application persistence, slow rate of kill and high host specificity currently contribute to restricted use in pest control. Overcoming these limitations are key research areas for which progress could open up use of insect viruses to much larger markets. A small number of entomopathogenic bacteria have been commercially developed for control of insect pests. These include several Bacillus thuringiensis sub-species, Lysinibacillus (Bacillus) sphaericus, Paenibacillus spp. and Serratia entomophila. B. thuringiensis sub-species kurstaki is the most widely used for control of pest insects of crops and forests, and B. thuringiensis sub-species israelensis and L. sphaericus are the primary pathogens used for control of medically important pests including dipteran vectors. These pathogens combine the advantages of chemical pesticides and MCAs: they are fast acting, easy to produce at a relatively low cost, easy to formulate, have a long shelf life and allow delivery using conventional application equipment and systemics (i.e. in transgenic plants). Unlike broad spectrum chemical pesticides, B. thuringiensis toxins are selective and negative environmental impact is very limited. Of the several commercially produced MCAs, B. thuringiensis (Bt) has more than 50% of market share. Extensive research, particularly on the molecular mode of action of Bt toxins, has been conducted over the past two decades. The Bt genes used in insect-resistant transgenic crops belong to the Cry and vegetative insecticidal protein families of toxins. Bt has been highly efficacious in pest management of corn and cotton, drastically reducing the amount of broad spectrum chemical insecticides used while being safe for consumers and non-target organisms. Despite successes, the adoption of Bt crops has not been without controversy. Although there is a lack of scientific evidence regarding their detrimental effects, this controversy has created the widespread perception in some quarters that Bt crops are dangerous for the environment. In addition to discovery of more efficacious isolates and toxins, an increase in the use of Bt products and transgenes will rely on innovations in formulation, better delivery systems and ultimately, wider public acceptance of transgenic plants expressing insect-specific Bt toxins. Fungi are ubiquitous natural entomopathogens that often cause epizootics in host insects and possess many desirable traits that favor their development as MCAs. Presently, commercialized microbial pesticides based on entomopathogenic fungi largely occupy niche markets. A variety of molecular tools and technologies have recently allowed reclassification of numerous species based on phylogeny, as well as matching anamorphs (asexual forms) and teleomorphs (sexual forms) of several entomopathogenic taxa in the Phylum Ascomycota. Although these fungi have been traditionally regarded exclusively as pathogens of arthropods, recent studies have demonstrated that they occupy a great diversity of ecological niches. Entomopathogenic fungi are now known to be plant endophytes, plant disease antagonists, rhizosphere colonizers, and plant growth promoters. These newly understood attributes provide possibilities to use fungi in multiple roles. In addition to arthropod pest control, some fungal species could simultaneously suppress plant pathogens and plant parasitic nematodes as well as promote plant growth. A greater understanding of fungal ecology is needed to define their roles in nature and evaluate their limitations in biological control. More efficient mass production, formulation and delivery systems must be devised to supply an ever increasing market. More testing under field conditions is required to identify effects of biotic and abiotic factors on efficacy and persistence. Lastly, greater attention must be paid to their use within integrated pest management programs; in particular, strategies that incorporate fungi in combination with arthropod predators and parasitoids need to be defined to ensure compatibility and maximize efficacy. Entomopathogenic nematodes (EPNs) in the genera Steinernema and Heterorhabditis are potent MCAs. Substantial progress in research and application of EPNs has been made in the past decade. The number of target pests shown to be susceptible to EPNs has continued to increase. Advancements in this regard primarily have been made in soil habitats where EPNs are shielded from environmental extremes, but progress has also been made in use of nematodes in above-ground habitats owing to the development of improved protective formulations. Progress has also resulted from advancements in nematode production technology using both in vivo and in vitro systems; novel application methods such as distribution of infected host cadavers; and nematode strain improvement via enhancement and stabilization of beneficial traits. Innovative research has also yielded insights into the fundamentals of EPN biology including major advances in genomics, nematode-bacterial symbiont interactions, ecological relationships, and foraging behavior. Additional research is needed to leverage these basic findings toward direct improvements in microbial control.

Bizarre interactions and endgames: entomopathogenic fungi and their arthropod hosts.

Richard A Hajek,  Paul H. Roy,  Theresa Pell … (2005)
Invertebrate pathogens and their hosts are taxonomically diverse. Despite this, there is one unifying concept relevant to all such parasitic associations: Both pathogen and host adapt to maximize their own reproductive output and ultimate fitness. The strategies adopted by pathogens and hosts to achieve this goal are almost as diverse as the organisms themselves, but studies examining such relationships have traditionally concentrated only on aspects of host physiology. Here we review examples of host-altered behavior and consider these within a broad ecological and evolutionary context. Research on pathogen-induced and host-mediated behavioral changes demonstrates the range of altered behaviors exhibited by invertebrates including behaviorally induced fever, elevation seeking, reduced or increased activity, reduced response to semiochemicals, and changes in reproductive behavior. These interactions are sometimes quite bizarre, intricate, and of great scientific interest.

R: A language and environment for statistical computing