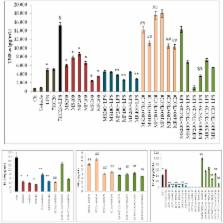 The present study consisted in evaluating the antioxidant, anti-inflammatory and cytoprotective properties of ethanolic extracts from three mint species ( Mentha spicata L. (MS), Mentha pulegium L. (MP) and Mentha rotundifolia (L.) Huds (MR)) with biochemical methods on murine RAW 264.7 macrophages (a transformed macrophage cell line isolated from ascites of BALB/c mice infected by the Abelson leukemia virus). The total phenolic, flavonoid and carotenoid contents were determined with spectrophotometric methods. The antioxidant activities were quantified with the Kit Radicaux Libres (KRL TM), the ferric reducing antioxidant power (FRAP) and the 2,2-diphenyl-1-picrylhydrazyl (DPPH) assays. The MS extract showed the highest total phenolic content, and the highest antioxidant capacity, while the MR extract showed the lowest total phenolic content and the lowest antioxidant capacity. The cytoprotective and anti-inflammatory activities of the extracts were quantified on murine RAW 264.7 macrophages treated with 7-ketocholesterol (7KC; 20 µg/mL: 50 µM) associated or not for 24 h and 48 h with ethanolic mint extracts used at different concentrations (25, 50, 100, 200 and 400 µg/mL). Under treatment with 7KC, an important inhibition of cell growth was revealed with the crystal violet test. This side effect was strongly attenuated in a dose dependent manner with the different ethanolic mint extracts, mainly at 48 h. The most important cytoprotective effect was observed with the MS extract. In addition, the effects of ethanolic mint extracts on cytokine secretion (Interleukin (IL)-6, IL-10, Monocyte Chemoattractant Protein (MCP)-1, Interferon (IFN)-ϒ, Tumor necrosis factor (TNF)-α) were determined at 24 h on lipopolysaccharide (LPS, 0.2 µg/mL)-, 7KC (20 µg/mL)- and (7KC + LPS)-treated RAW 264.7 cells. Complex effects of mint extracts were observed on cytokine secretion. However, comparatively to LPS-treated cells, all the extracts strongly reduce IL-6 secretion and two of them (MP and MR) also decrease MCP-1 and TNF-α secretion. However, no anti-inflammatory effects were observed on 7KC- and (7KC + LPS)-treated cells. Altogether, these data bring new evidences on the potential benefits (especially antioxidant and cytoprotective properties) of Algerian mint on human health.

Oxysterols in the pathogenesis of major chronic diseases☆

Marco Matteo Ciccone,  Francesca Cortese,  Michele Gesualdo … (2013)
Cardiovascular disease related to atherosclerosis represents nowadays the largest cause of morbidity and mortality in developed countries. Due to inflammatory nature of atherosclerosis, several studies had been conducted in order to search for substances with anti-inflammatory activity on arterial walls, able to exert beneficial roles on health. Researches investigated the role of dietary carotenoids supplementation on cardiovascular disease, due to their free radicals scavenger properties and their skills in improving low-density lipoprotein cholesterol resistance to oxidation. Nevertheless, literature data are conflicting: although some studies found a positive relationship between carotenoids supplementation and cardiovascular risk reduction, others did not find any positive effects or even prooxidant actions. This paper aimed at defining the role of carotenoids supplementation on cardiovascular risk profile by reviewing literature data, paying attention to those carotenoids more present in our diet ( β -carotene, α -carotene, β -cryptoxanthin, lycopene, lutein, zeaxanthin, and astaxanthin).

Changes in brain oxysterols at different stages of Alzheimer's disease: Their involvement in neuroinflammation

Gabriella Testa,  Erica Staurenghi,  Chiara Zerbinati … (2016)
Alzheimer's disease (AD) is a gradually debilitating disease that leads to dementia. The molecular mechanisms underlying AD are still not clear, and at present no reliable biomarkers are available for the early diagnosis. In the last several years, together with oxidative stress and neuroinflammation, altered cholesterol metabolism in the brain has become increasingly implicated in AD progression. A significant body of evidence indicates that oxidized cholesterol, in the form of oxysterols, is one of the main triggers of AD. The oxysterols potentially most closely involved in the pathogenesis of AD are 24-hydroxycholesterol and 27-hydroxycholesterol, respectively deriving from cholesterol oxidation by the enzymes CYP46A1 and CYP27A1. However, the possible involvement of oxysterols resulting from cholesterol autooxidation, including 7-ketocholesterol and 7β-hydroxycholesterol, is now emerging. In a systematic analysis of oxysterols in post-mortem human AD brains, classified by the Braak staging system of neurofibrillary pathology, alongside the two oxysterols of enzymatic origin, a variety of oxysterols deriving from cholesterol autoxidation were identified; these included 7-ketocholesterol, 7α-hydroxycholesterol, 4β-hydroxycholesterol, 5α,6α-epoxycholesterol, and 5β,6β-epoxycholesterol. Their levels were quantified and compared across the disease stages. Some inflammatory mediators, and the proteolytic enzyme matrix metalloprotease-9, were also found to be enhanced in the brains, depending on disease progression. This highlights the pathogenic association between the trends of inflammatory molecules and oxysterol levels during the evolution of AD. Conversely, sirtuin 1, an enzyme that regulates several pathways involved in the anti-inflammatory response, was reduced markedly with the progression of AD, supporting the hypothesis that the loss of sirtuin 1 might play a key role in AD. Taken together, these results strongly support the association between changes in oxysterol levels and AD progression.