Extra-Mediterranean refugia: The rule and not the exception? 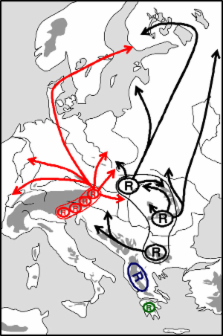 Some decades ago, biogeographers distinguished three major faunal types of high importance for Europe: (i) Mediterranean elements with exclusive glacial survival in the Mediterranean refugia, (ii) Siberian elements with glacial refugia in the eastern Palearctic and only postglacial expansion to Europe and (iii) arctic and/or alpine elements with large zonal distributions in the periglacial areas and postglacial retreat to the North and/or into the high mountain systems. Genetic analyses have unravelled numerous additional refugia both of continental and Mediterranean species, thus strongly modifying the biogeographical view of Europe. This modified notion is particularly true for the so-called Siberian species, which in many cases have not immigrated into Europe during the postglacial period, but most likely have survived the last, or even several glacial phases, in extra-Mediterranean refugia in some climatically favourable but geographically limited areas of southern Central and Eastern Europe. Recently, genetic analyses revealed that typical Mediterranean species have also survived the Last Glacial Maximum in cryptic northern refugia (e.g. in the Carpathians or even north of the Alps) in addition to their Mediterranean refuge areas.

Arndt Hampe,  Rémy Petit (2005)
Modern climate change is producing poleward range shifts of numerous taxa, communities and ecosystems worldwide. The response of species to changing environments is likely to be determined largely by population responses at range margins. In contrast to the expanding edge, the low-latitude limit (rear edge) of species ranges remains understudied, and the critical importance of rear edge populations as long-term stores of species' genetic diversity and foci of speciation has been little acknowledged. We review recent findings from the fossil record, phylogeography and ecology to illustrate that rear edge populations are often disproportionately important for the survival and evolution of biota. Their ecological features, dynamics and conservation requirements differ from those of populations in other parts of the range, and some commonly recommended conservation practices might therefore be of little use or even counterproductive for rear edge populations.

Jim Provan,  Anna K Bennett (2008)
The glacial episodes of the Quaternary (2.6 million years ago-present) were a major factor in shaping the present-day distributions of extant flora and fauna, with expansions and contractions of the ice sheets rendering large areas uninhabitable for most species. Fossil records suggest that many species survived glacial maxima by retreating to refugia, usually at lower latitudes. Recently, phylogeographic studies have given support to the existence of previously unknown, or cryptic, refugia. Here we summarise many of these insights into the glacial histories of species in cryptic refugia gained through phylogeographic approaches. Understanding such refugia might be important as the Earth heads into another period of climate change, in terms of predicting the effects on species distribution and survival.

Cryptic northern refugia and the origins of the modern biota