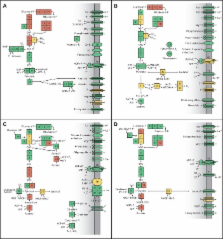 Cultivation-independent surveys of microbial diversity have revealed many bacterial phyla that lack cultured representatives. These lineages, referred to as candidate phyla, have been detected across many environments. Here, we deeply sequenced microbial communities from acetate-stimulated aquifer sediment to recover the complete and essentially complete genomes of single representatives of the candidate phyla SR1, WWE3, TM7, and OD1. All four of these genomes are very small, 0.7 to 1.2 Mbp, and have large inventories of novel proteins. Additionally, all lack identifiable biosynthetic pathways for several key metabolites. The SR1 genome uses the UGA codon to encode glycine, and the same codon is very rare in the OD1 genome, suggesting that the OD1 organism could also transition to alternate coding. Interestingly, the relative abundance of the members of SR1 increased with the appearance of sulfide in groundwater, a pattern mirrored by a member of the phylum Tenericutes. All four genomes encode type IV pili, which may be involved in interorganism interaction. On the basis of these results and other recently published research, metabolic dependence on other organisms may be widely distributed across multiple bacterial candidate phyla.

Few or no genomic sequences exist for members of the numerous bacterial phyla lacking cultivated representatives, making it difficult to assess their roles in the environment. This paper presents three complete and one essentially complete genomes of members of four candidate phyla, documents consistently small genome size, and predicts metabolic capabilities on the basis of gene content. These metagenomic analyses expand our view of a lifestyle apparently common across these candidate phyla.

Stephen F Altschul,  Warren Gish,  Webb Miller … (1990)
A new approach to rapid sequence comparison, basic local alignment search tool (BLAST), directly approximates alignments that optimize a measure of local similarity, the maximal segment pair (MSP) score. Recent mathematical results on the stochastic properties of MSP scores allow an analysis of the performance of this method as well as the statistical significance of alignments it generates. The basic algorithm is simple and robust; it can be implemented in a number of ways and applied in a variety of contexts including straightforward DNA and protein sequence database searches, motif searches, gene identification searches, and in the analysis of multiple regions of similarity in long DNA sequences. In addition to its flexibility and tractability to mathematical analysis, BLAST is an order of magnitude faster than existing sequence comparison tools of comparable sensitivity.

Ben Langmead,  Steven Salzberg (2015)
As the rate of sequencing increases, greater throughput is demanded from read aligners. The full-text minute index is often used to make alignment very fast and memory-efficient, but the approach is ill-suited to finding longer, gapped alignments. Bowtie 2 combines the strengths of the full-text minute index with the flexibility and speed of hardware-accelerated dynamic programming algorithms to achieve a combination of high speed, sensitivity and accuracy.