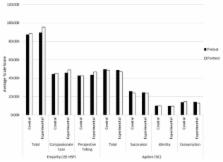 Despite the rapid increase in the size of the geriatric population, no current published literature is available based on the effects of viewing a documentary covering medical and psychosocial issues concerning older adults influencing young people’s empathy and ageism. The aim of the current study was to test whether participants who viewed an original documentary about older adults experiencing physical pain would report lower ageism and higher empathy scores when compared to participants who watched a neutral documentary.

Seventy-seven students (ages 18–29 years) were randomized to either the experimental (pain documentary) or the control (neutral documentary) conditions and given pre- and post-test measures of empathy and ageism.

The findings of this preliminary study indicate that showing a pain-based, anti-bias documentary feature film has the potential to significantly improve empathy towards older adults in university students.

This Old Stereotype: The Pervasiveness and Persistence of the Elderly Stereotype

Modern attitudes toward older adults in the aging world: A cross-cultural meta-analysis.

A conceptual framework for the use of illness narratives in medical education.

K Kumagai (2008)
The use of narratives, including physicians' and patients' stories, literature, and film, is increasingly popular in medical education. There is, however, a need for an overarching conceptual framework to guide these efforts, which are often dismissed as "soft" and placed at the margins of medical school curricula. The purpose of this article is to describe the conceptual basis for an approach to patient-centered medical education and narrative medicine initiated at the University of Michigan Medical School in the fall of 2003. This approach, the Family Centered Experience, involves home visits and conversations between beginning medical students and patient volunteers and their families and is aimed at fostering humanism in medicine. The program incorporates developmental and learning theory, longitudinal interactions with individuals with chronic illness, reflective learning, and small-group discussions to explore the experience of illness and its care. The author describes a grounding of this approach in theories of empathy and moral development and clarifies the educational value that narratives bring to medical education. Specific pedagogical considerations, including use of activities to create "cognitive disequilibrium" and the concept of transformative learning, are also discussed and may be applied to narrative medicine, professionalism, multicultural education, medical ethics, and other subject areas in medical education that address individuals and their health care needs in society.

This is an open access article distributed under the Creative Commons Attribution 4.0 International License (CC BY 4.0), which permits unrestricted use, distribution, and reproduction in any medium, provided the original work is properly cited.