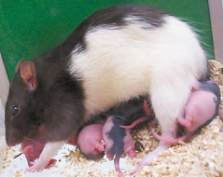 Early experience permanently alters behavior and physiology. These effects are, in part, mediated by sustained alterations in gene expression in selected brain regions. The critical question concerns the mechanism of these environmental “programming” effects. We examine this issue with an animal model that studies the consequences of variations in mother-infant interactions on the development of individual differences in behavioral and endocrine responses to stress in adulthood. Increased levels of pup licking/grooming by rat mothers in the first week of life alter DNA structure at a glucocorticoid receptor gene promoter in the hippocampus of the offspring. Differences in the DNA methylation pattern between the offspring of high- and low-lickinglgrooming mothers emerge over the first week of life; they are reversed with cross-fostering; they persist into adulthood; and they are associated with altered histone acetylation and transcription factor (nerve growth factor-induced clone A [NGFIA]) binding to the glucocorticoid receptor promoter. DNA methylation alters glucocorticoid receptor expression through modifications of chromatin structure. Pharmacological reversal of the effects on chromatin structure completely eliminates the effects of maternal care on glucocorticoid receptor expression and hypothalamic-pituitary-adrenal (HPA) responses to stress, thus suggesting a causal relation between the maternally induced, epigenetic modification of the glucocorticoid receptor gene and the effects on stress responses in the offspring. These findings demonstrate that the structural modifications of the DNA can be established through environmental programming and that, in spite of the inherent stability of this epigenomic marker, it is dynamic and potentially reversible.

Ian Weaver,  Nadia Cervoni,  Frances Champagne … (2004)
Here we report that increased pup licking and grooming (LG) and arched-back nursing (ABN) by rat mothers altered the offspring epigenome at a glucocorticoid receptor (GR) gene promoter in the hippocampus. Offspring of mothers that showed high levels of LG and ABN were found to have differences in DNA methylation, as compared to offspring of 'low-LG-ABN' mothers. These differences emerged over the first week of life, were reversed with cross-fostering, persisted into adulthood and were associated with altered histone acetylation and transcription factor (NGFI-A) binding to the GR promoter. Central infusion of a histone deacetylase inhibitor removed the group differences in histone acetylation, DNA methylation, NGFI-A binding, GR expression and hypothalamic-pituitary-adrenal (HPA) responses to stress, suggesting a causal relation among epigenomic state, GR expression and the maternal effect on stress responses in the offspring. Thus we show that an epigenomic state of a gene can be established through behavioral programming, and it is potentially reversible.

The adaptive significance of maternal effects

T Mousseau (1998)
Recently, the adaptive significance of maternal effects has been increasingly recognized. No longer are maternal effects relegated as simple `troublesome sources of environmental resemblance' that confound our ability to estimate accurately the genetic basis of traits of interest. Rather, it has become evident that many maternal effects have been shaped by the action of natural selection to act as a mechanism for adaptive phenotypic response to environmental heterogeneity. Consequently, maternal experience is translated into variation in offspring fitness.

D Vermaak,  N Landsberger,  J Strouboulis … (1998)
CpG methylation in vertebrates correlates with alterations in chromatin structure and gene silencing. Differences in DNA-methylation status are associated with imprinting phenomena and carcinogenesis. In Xenopus laevis oocytes, DNA methylation dominantly silences transcription through the assembly of a repressive nucleosomal array. Methylated DNA assembled into chromatin binds the transcriptional repressor MeCP2 which cofractionates with Sin3 and histone deacetylase. Silencing conferred by MeCP2 and methylated DNA can be relieved by inhibition of histone deacetylase, facilitating the remodelling of chromatin and transcriptional activation. These results establish a direct causal relationship between DNA methylation-dependent transcriptional silencing and the modification of chromatin.