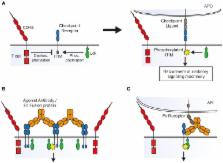 Antibodies that block the immune checkpoint receptors PD1 and CTLA4 have revolutionized the treatment of melanoma and several other cancers, but in the process, a new class of drug side effect has emerged—immune related adverse events. The observation that therapeutic blockade of these inhibitory receptors is sufficient to break self-tolerance, highlights their crucial role in the physiological modulation of immune responses. Here, we discuss the rationale for targeting immune checkpoint receptors with agonistic agents in autoimmunity, to restore tolerance when it is lost. We review progress that has been made to date, using Fc-fusion proteins, monoclonal antibodies or other novel constructs to induce immunosuppressive signaling through these pathways. Finally, we explore potential mechanisms by which these receptors trigger and modulate immune cell function, and how understanding these processes might shape the design of more effective therapeutic agents in future.

A regulatory polymorphism in PDCD1 is associated with susceptibility to systemic lupus erythematosus in humans.

Guadalupe Lima,  V Magnusson,  John B. Harley … (2002)
Systemic lupus erythematosus (SLE, OMIM 152700) is a complex autoimmune disease that affects 0.05% of the Western population, predominantly women. A number of susceptibility loci for SLE have been suggested in different populations, but the nature of the susceptibility genes and mutations is yet to be identified. We previously reported a susceptibility locus (SLEB2) for Nordic multi-case families. Within this locus, the programmed cell death 1 gene (PDCD1, also called PD-1) was considered the strongest candidate for association with the disease. Here, we analyzed 2,510 individuals, including members of five independent sets of families as well as unrelated individuals affected with SLE, for single-nucleotide polymorphisms (SNPs) that we identified in PDCD1. We show that one intronic SNP in PDCD1 is associated with development of SLE in Europeans (found in 12% of affected individuals versus 5% of controls; P = 0.00001, r.r. (relative risk) = 2.6) and Mexicans (found in 7% of affected individuals versus 2% of controls; P = 0.0009, r.r. = 3.5). The associated allele of this SNP alters a binding site for the runt-related transcription factor 1 (RUNX1, also called AML1) located in an intronic enhancer, suggesting a mechanism through which it can contribute to the development of SLE in humans.

Kota Watanabe,  Toshiro Niki,  MITSUOMI HIRASHIMA … (2008)
The effects of galectin-9 on a mouse collagen-induced arthritis (CIA) model were assessed to clarify whether galectin-9 suppresses CIA by regulating T cell immune responses. Galectin-9 suppressed CIA in a dose-dependent manner, and such suppression was observed even when treatment was started on 7 days after the booster, indicating its preventive and therapeutic effects. Galectin-9 induced the decreased levels of pro-inflammatory cytokines, IL-17, IL-12, and IFNgamma in the joint. Galectin-9 induced the decreased number of CD4(+) TIM-3(+) T cells in peripheral blood. Galectin-9-deficient mice became susceptible to CIA may be by increased number of CD4(+) TIM-3(+) T cells and decreased number of Treg cells. We further found that galectin-9 induces differentiation of naive T cells to Treg cells, and it suppresses differentiation to Th17 cells in vitro. The present results suggested that galectin-9 ameliorates CIA by suppressing the generation of Th17, promoting the induction of regulatory T cells.

Christopher Nirschl,  Charles Drake (2013)
The expression of immune checkpoint molecules on T cells represents an important mechanism that the immune system uses to regulate responses to self-proteins. Checkpoint molecules include cytotoxic T lymphocyte antigen-4, programmed death-1, lymphocyte activation gene-3, T-cell immunoglobulin and mucin protein-3, and several others. Previous studies have identified individual roles for each of these molecules, but more recent data show that coexpression of checkpoint molecules occurs frequently on cancer-specific T cells as well as on pathogen-specific T cells in chronic infections. As the signaling pathways associated with each checkpoint molecule have not been fully elucidated, blocking multiple checkpoints with specific monoclonal antibodies results in improved outcomes in several chronic viral infections as well as in a wide array of preclinical models of cancer. Recent clinical data suggest similar effects in patients with metastatic melanoma. These findings support the concept that individual immune checkpoint molecules may function through nonoverlapping molecular mechanisms. Here, we review current data regarding immune checkpoint molecule signaling and coexpression, both in cancer and infectious disease, as well as the results of preclinical and clinical manipulations of checkpoint proteins. ©2013 AACR.

This article was submitted to T Cell Biology, a section of the journal Frontiers in Immunology