Abnormal blood flow in the sublingual microcirculation at high altitude 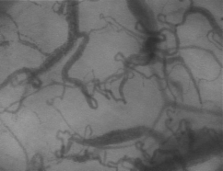 We report the first direct observations of deranged microcirculatory blood flow at high altitude, using sidestream dark-field imaging. Images of the sublingual microcirculation were obtained from a group of 12 volunteers during a climbing expedition to Cho Oyu (8,201 m) in the Himalayas. Microcirculatory flow index (MFI) was calculated from the moving images of microcirculatory red blood cell flow, and comparison was made between the baseline and high altitude measurements. Peripheral oxygen saturation (SpO 2) and Lake Louise scores (LLS) were recorded along with MFI. Our data demonstrate that there was a significant reduction in MFI from baseline to 4,900 m in small (less than 25 μm) and medium (26–50 μm) sized blood vessels ( P = 0.025 and P = 0.046, respectively). There was no significant correlation between MFI and SpO 2 or MFI and LLS. Disruption of blood flow within microcirculatory may explain persistent abnormal oxygen flux to tissues following the normalisation of systemic oxygen delivery that accompanies acclimatisation to high altitude.

E. Boerma,  Keshen Mathura,  Peter HJ van der Voort … (2005)
Introduction The introduction of orthogonal polarization spectral (OPS) imaging in clinical research has elucidated new perspectives on the role of microcirculatory flow abnormalities in the pathogenesis of sepsis. Essential to the process of understanding and reproducing these abnormalities is the method of quantification of flow scores. Methods In a consensus meeting with collaboraters from six research centres in different fields of experience with microcirculatory OPS imaging, premeditated qualifications for a simple, translucent and reproducible way of flow scoring were defined. Consecutively, a single-centre prospective observational validation study was performed in a group of 12 patients with an abdominal sepsis and a new stoma. Flow images of the microcirculation in vascular beds of the sublingual and stoma region were obtained, processed and analysed in a standardised way. We validated intra-observer and inter-observer reproducibility with kappa cross-tables for both types of microvascular beds. Results Agreement and kappa coefficients were >85% and >0.75, respectively, for interrater and intrarater variability in quantification of flow abnormalities during sepsis, in different subsets of microvascular architecture. Conclusion Semi-quantitative analysis of microcirculatory flow, as described, provides a reproducible and transparent tool in clinical research to monitor and evaluate the microcirculation during sepsis.