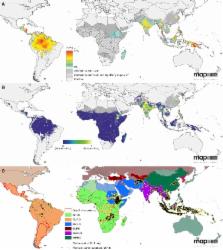 Plasmodium vivax is the most widespread human malaria, putting 2.5 billion people at risk of infection. Its unique biological and epidemiological characteristics pose challenges to control strategies that have been principally targeted against Plasmodium falciparum. Unlike P. falciparum, P. vivax infections have typically low blood-stage parasitemia with gametocytes emerging before illness manifests, and dormant liver stages causing relapses. These traits affect both its geographic distribution and transmission patterns. Asymptomatic infections, high-risk groups, and resulting case burdens are described in this review. Despite relatively low prevalence measurements and parasitemia levels, along with high proportions of asymptomatic cases, this parasite is not benign. Plasmodium vivax can be associated with severe and even fatal illness. Spreading resistance to chloroquine against the acute attack, and the operational inadequacy of primaquine against the multiple attacks of relapse, exacerbates the risk of poor outcomes among the tens of millions suffering from infection each year. Without strategies accounting for these P. vivax-specific characteristics, progress toward elimination of endemic malaria transmission will be substantially impeded.

Peter W. Gething,  Anand P Patil,  David Smith … (2012)
Background Transmission intensity affects almost all aspects of malaria epidemiology and the impact of malaria on human populations. Maps of transmission intensity are necessary to identify populations at different levels of risk and to evaluate objectively options for disease control. To remain relevant operationally, such maps must be updated frequently. Following the first global effort to map Plasmodium falciparum malaria endemicity in 2007, this paper describes the generation of a new world map for the year 2010. This analysis is extended to provide the first global estimates of two other metrics of transmission intensity for P. falciparum that underpin contemporary questions in malaria control: the entomological inoculation rate (PfEIR) and the basic reproductive number (PfR). Methods Annual parasite incidence data for 13,449 administrative units in 43 endemic countries were sourced to define the spatial limits of P. falciparum transmission in 2010 and 22,212 P. falciparum parasite rate (PfPR) surveys were used in a model-based geostatistical (MBG) prediction to create a continuous contemporary surface of malaria endemicity within these limits. A suite of transmission models were developed that link PfPR to PfEIR and PfR and these were fitted to field data. These models were combined with the PfPR map to create new global predictions of PfEIR and PfR. All output maps included measured uncertainty. Results An estimated 1.13 and 1.44 billion people worldwide were at risk of unstable and stable P. falciparum malaria, respectively. The majority of the endemic world was predicted with a median PfEIR of less than one and a median PfR c of less than two. Values of either metric exceeding 10 were almost exclusive to Africa. The uncertainty described in both PfEIR and PfR was substantial in regions of intense transmission. Conclusions The year 2010 has a particular significance as an evaluation milestone for malaria global health policy. The maps presented here contribute to a rational basis for control and elimination decisions and can serve as a baseline assessment as the global health community looks ahead to the next series of milestones targeted at 2015.

Epidemiology and infectivity of Plasmodium falciparum and Plasmodium vivax gametocytes in relation to malaria control and elimination.

Chris Drakeley,  Teun Bousema (2011)
Malaria remains a major cause of morbidity and mortality in the tropics, with Plasmodium falciparum responsible for the majority of the disease burden and P. vivax being the geographically most widely distributed cause of malaria. Gametocytes are the sexual-stage parasites that infect Anopheles mosquitoes and mediate the onward transmission of the disease. Gametocytes are poorly studied despite this crucial role, but with a recent resurgence of interest in malaria elimination, the study of gametocytes is in vogue. This review highlights the current state of knowledge with regard to the development and longevity of P. falciparum and P. vivax gametocytes in the human host and the factors influencing their distribution within endemic populations. The evidence for immune responses, antimalarial drugs, and drug resistance influencing infectiousness to mosquitoes is reviewed. We discuss how the application of molecular techniques has led to the identification of submicroscopic gametocyte carriage and to a reassessment of the human infectious reservoir. These components are drawn together to show how control measures that aim to reduce malaria transmission, such as mass drug administration and a transmission-blocking vaccine, might better be deployed.

* Address correspondence to Katherine E. Battle, Big Data Institute, Nuffield Department of Medicine, University of Oxford, c/o Wellcome Trust Centre for Human Genetics, Roosevelt Drive, Oxford OX3 7BN, United Kingdom, E-mail: katherine.battle@ 123456well.ox.ac.uk or Simon I. Hay, Institute for Health Metrics and Evaluation, University of Washington, 2301 5th Ave, Suite 600, Seattle, WA 98121, E-mail: sihay@ 123456uw.edu .
† These authors contributed equally to this work.
© World Health Organization 2016. Licensee American Journal of Tropical Medicine and Hygiene. This is an open access article distributed under the terms of the Creative Commons Attribution IGO License ( http://creativecommons.org/licenses/by/3.0/igo/legalcode), which permits unrestricted use, distribution, and reproduction in any medium, provided the original work is properly cited. In any reproduction of this article there should not be any suggestion that WHO or this article endorse any specific organization or products. The use of the WHO logo is not permitted. This notice should be preserved along with the article's original URL.