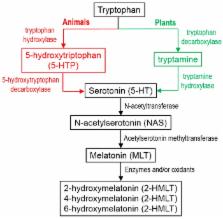 There is currently no doubt about the serious threat that oxidative stress (OS) poses to human health. Therefore, a crucial strategy to maintain a good health status is to identify molecules capable of offering protection against OS through chemical routes. Based on the known efficiency of the phenolic and melatonin (MLT) families of compounds as antioxidants, it is logical to assume that phenolic MLT-related compounds should be (at least) equally efficient. Unfortunately, they have been less investigated than phenols, MLT and its non-phenolic metabolites in this context. The evidence reviewed here strongly suggests that MLT phenolic derivatives can act as both primary and secondary antioxidants, exerting their protection through diverse chemical routes. They all seem to be better free radical scavengers than MLT and Trolox, while some of them also surpass ascorbic acid and resveratrol. However, there are still many aspects that deserve further investigations for this kind of compounds.

Design of Density Functionals by Combining the Method of Constraint Satisfaction with Parametrization for Thermochemistry, Thermochemical Kinetics, and Noncovalent Interactions.

Yan Zhao,  Nathan Schultz,  Donald Truhlar (2006)
We present a new hybrid meta exchange-correlation functional, called M05-2X, for thermochemistry, thermochemical kinetics, and noncovalent interactions. We also provide a full discussion of the new M05 functional, previously presented in a short communication. The M05 functional was parametrized including both metals and nonmetals, whereas M05-2X is a high-nonlocality functional with double the amount of nonlocal exchange (2X) that is parametrized only for nonmetals. In particular, M05 was parametrized against 35 data values, and M05-2X is parametrized against 34 data values. Both functionals, along with 28 other functionals, have been comparatively assessed against 234 data values:  the MGAE109/3 main-group atomization energy database, the IP13/3 ionization potential database, the EA13/3 electron affinity database, the HTBH38/4 database of barrier height for hydrogen-transfer reactions, five noncovalent databases, two databases involving metal-metal and metal-ligand bond energies, a dipole moment database, a database of four alkyl bond dissociation energies of alkanes and ethers, and three total energies of one-electron systems. We also tested the new functionals and 12 others for eight hydrogen-bonding and stacking interaction energies in nucleobase pairs, and we tested M05 and M05-2X and 19 other functionals for the geometry, dipole moment, and binding energy of HCN-BF3, which has recently been shown to be a very difficult case for density functional theory. We tested eight functionals for four more alkyl bond dissociation energies, and we tested 12 functionals for several additional bond energies with varying amounts of multireference character. On the basis of all the results for 256 data values in 18 databases in the present study, we recommend M05-2X, M05, PW6B95, PWB6K, and MPWB1K for general-purpose applications in thermochemistry, kinetics, and noncovalent interactions involving nonmetals and we recommend M05 for studies involving both metallic and nonmetallic elements. The M05 functional, essentially uniquely among the functionals with broad applicability to chemistry, also performs well not only for main-group thermochemistry and radical reaction barrier heights but also for transition-metal-transition-metal interactions. The M05-2X functional has the best performance for thermochemical kinetics, noncovalent interactions (especially weak interaction, hydrogen bonding, π···π stacking, and interactions energies of nucleobases), and alkyl bond dissociation energies and the best composite results for energetics, excluding metals.

Licensee MDPI, Basel, Switzerland. This article is an open access article distributed under the terms and conditions of the Creative Commons Attribution (CC-BY) license ( http://creativecommons.org/licenses/by/4.0/).