Peptides, Peptidomimetics, and Polypeptides from Marine Sources: A Wealth of Natural Sources for Pharmaceutical Applications 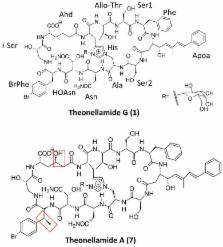 Nature provides a variety of peptides that are expressed in most living species. Evolutionary pressure and natural selection have created and optimized these peptides to bind to receptors with high affinity. Hence, natural resources provide an abundant chemical space to be explored in peptide-based drug discovery. Marine peptides can be extracted by simple solvent extraction techniques. The advancement of analytical techniques has made it possible to obtain pure peptides from natural resources. Extracted peptides have been evaluated as possible therapeutic agents for a wide range of diseases, including antibacterial, antifungal, antidiabetic and anticancer activity as well as cardiovascular and neurotoxin activity. Although marine resources provide thousands of possible peptides, only a few peptides derived from marine sources have reached the pharmaceutical market. This review focuses on some of the peptides derived from marine sources in the past ten years and gives a brief review of those that are currently in clinical trials or on the market.

The future of peptide-based drugs.

David Fairlie,  David J. Craik,  Spiros Liras … (2012)
The suite of currently used drugs can be divided into two categories - traditional 'small molecule' drugs with typical molecular weights of 5000 Da that are not orally bioavailable and need to be delivered via injection. Due to their small size, conventional small molecule drugs may suffer from reduced target selectivity that often ultimately manifests in human side-effects, whereas protein therapeutics tend to be exquisitely specific for their targets due to many more interactions with them, but this comes at a cost of low bioavailability, poor membrane permeability, and metabolic instability. The time has now come to reinvestigate new drug leads that fit between these two molecular weight extremes, with the goal of combining advantages of small molecules (cost, conformational restriction, membrane permeability, metabolic stability, oral bioavailability) with those of proteins (natural components, target specificity, high potency). This article uses selected examples of peptides to highlight the importance of peptide drugs, some potential new opportunities for their exploitation, and some difficult challenges ahead in this field. © 2012 John Wiley & Sons A/S.

K.V.R. Reddy,  R.D. Yedery,  C. Aranha (2004)
Antimicrobial peptides (AMPs) are an important component of the natural defences of most living organisms against invading pathogens. These are relatively small (< 10kDa), cationic and amphipathic peptides of variable length, sequence and structure. During the past two decades several AMPs have been isolated from a wide variety of animals, both vertebrates and invertebrates, and plants as well as from bacteria and fungi. Most of these peptides are obtained from different sources like macrophages, neutrophils, epithelial cells, haemocytes, fat body, reproductive tract, etc. These peptides exhibit broad-spectrum activity against a wide range of microorganisms including Gram-positive and Gram-negative bacteria, protozoa, yeast, fungi and viruses. A few peptides have also been found to be cytotoxic to sperm and tumour cells. AMPs are classified based on the three dimensional structural studies carried out with the help of NMR. The peptides are broadly classified into five major groups namely (a) peptides that form alpha-helical structures, (b) peptides rich in cysteine residues, (c) peptides that form beta-sheet, (d) peptides rich in regular amino acids namely histatin, arginine and proline and (e) peptides composed of rare and modified amino acids. Most of these peptides are believed to act by disrupting the plasma membrane leading to the lysis of the cell. AMPs have been found to be excellent candidates for developing novel antimicrobial agents and a few of these peptides show antimicrobial activity against pathogens causing sexually transmitted infection (STI), including HIV/HSV. Peptides, namely magainin and nisin have been shown to demonstrate contraceptive properties in vitro and in vivo. A few peptides have already entered clinical trials for the treatment of impetigo, diabetic foot ulcers and gastric helicobacter infections. In this review, we discuss the source, structures and mode of action with special reference to therapeutic considerations of various AMPs.

Catherine Burke,  Staffan Kjelleberg,  Suhelen Egan … (2013)
Seaweeds (macroalgae) form a diverse and ubiquitous group of photosynthetic organisms that play an essential role in aquatic ecosystems. These ecosystem engineers contribute significantly to global primary production and are the major habitat formers on rocky shores in temperate waters, providing food and shelter for aquatic life. Like other eukaryotic organisms, macroalgae harbor a rich diversity of associated microorganisms with functions related to host health and defense. In particular, epiphytic bacterial communities have been reported as essential for normal morphological development of the algal host, and bacteria with antifouling properties are thought to protect chemically undefended macroalgae from detrimental, secondary colonization by other microscopic and macroscopic epibiota. This tight relationship suggests that macroalgae and epiphytic bacteria interact as a unified functional entity or holobiont, analogous to the previously suggested relationship in corals. Moreover, given that the impact of diseases in marine ecosystems is apparently increasing, understanding the role of bacteria as saprophytes and pathogens in seaweed communities may have important implications for marine management strategies. This review reports on the recent advances in the understanding of macroalgal-bacterial interactions with reference to the diversity and functional role of epiphytic bacteria in maintaining algal health, highlighting the holobiont concept. © 2012 Federation of European Microbiological Societies. Published by Blackwell Publishing Ltd. All rights reserved.