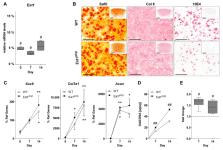 Osteoarthritis (OA) represents one major cause of disability worldwide still evading efficient pharmacological or cellular therapies. Severe degeneration of extracellular cartilage matrix precedes the loss of mobility and disabling pain perception in affected joints. Recent studies showed that a reduced heparan sulfate (HS) content protects cartilage from degradation in OA-animal models of joint destabilization but the underlying mechanisms remained unclear. We aimed to clarify whether low HS-content alters the mechano-response of chondrocytes and to uncover pathways relevant for HS-related chondro-protection in response to loading. Tissue-engineered cartilage with HS-deficiency was generated from rib chondrocytes of mice carrying a hypomorphic allele of Exostosin 1 ( Ext1), one of the main HS-synthesizing enzymes, and wildtype (WT) littermate controls. Engineered cartilage matured for 2 weeks was exposed to cyclic unconfined compression in a bioreactor. The molecular loading response was determined by transcriptome profiling, bioinformatic data processing, and qPCR. HS-deficient chondrocytes expressed 3–6% of WT Ext1-mRNA levels. Both groups similarly raised Sox9, Col2a1 and Acan levels during maturation. However, HS-deficient chondrocytes synthesized and deposited 50% more GAG/DNA. TGFβ and FGF2-sensitivity of Ext1 gt/gt chondrocytes was similar to WT cells but their response to BMP-stimulation was enhanced. Loading induced similar activation of mechano-sensitive ERK and P38-signaling in WT and HS-reduced chondrocytes. Transcriptome analysis reflected regulation of cell migration as major load-induced biological process with similar stimulation of common ( Fosl1, Itgα5, Timp1, and Ngf) as well as novel mechano-regulated genes ( Inhba and Dhrs9). Remarkably, only Ext1-hypomorphic cartilage responded to loading by an expression signature of negative regulation of apoptosis with pro-apoptotic Bnip3 being selectively down-regulated. HS-deficiency enhanced BMP-sensitivity, GAG-production and fostered an anti-apoptotic expression signature after loading, all of which may protect cartilage from load-induced erosion.

Timothy Springer,  M M Shi,  Rui Wang … (2011)
Transforming growth factor (TGF)-β is stored in the extracellular matrix as a latent complex with its prodomain. Activation of TGF-β1 requires the binding of α(v) integrin to an RGD sequence in the prodomain and exertion of force on this domain, which is held in the extracellular matrix by latent TGF-β binding proteins. Crystals of dimeric porcine proTGF-β1 reveal a ring-shaped complex, a novel fold for the prodomain, and show how the prodomain shields the growth factor from recognition by receptors and alters its conformation. Complex formation between α(v)β(6) integrin and the prodomain is insufficient for TGF-β1 release. Force-dependent activation requires unfastening of a 'straitjacket' that encircles each growth-factor monomer at a position that can be locked by a disulphide bond. Sequences of all 33 TGF-β family members indicate a similar prodomain fold. The structure provides insights into the regulation of a family of growth and differentiation factors of fundamental importance in morphogenesis and homeostasis.

Significance analysis of microarrays applied to the ionizing radiation response.

V Tusher,  R Tibshirani,  G. Chu (2001)
Microarrays can measure the expression of thousands of genes to identify changes in expression between different biological states. Methods are needed to determine the significance of these changes while accounting for the enormous number of genes. We describe a method, Significance Analysis of Microarrays (SAM), that assigns a score to each gene on the basis of change in gene expression relative to the standard deviation of repeated measurements. For genes with scores greater than an adjustable threshold, SAM uses permutations of the repeated measurements to estimate the percentage of genes identified by chance, the false discovery rate (FDR). When the transcriptional response of human cells to ionizing radiation was measured by microarrays, SAM identified 34 genes that changed at least 1.5-fold with an estimated FDR of 12%, compared with FDRs of 60 and 84% by using conventional methods of analysis. Of the 34 genes, 19 were involved in cell cycle regulation and 3 in apoptosis. Surprisingly, four nucleotide excision repair genes were induced, suggesting that this repair pathway for UV-damaged DNA might play a previously unrecognized role in repairing DNA damaged by ionizing radiation.

Sylvie Thirion,  Marjolaine Gosset,  Claire Jacques … (2007)
The culture of chondrocytes is one of the most powerful tools for exploring the intracellular and molecular features of chondrocyte differentiation and activation. However, chondrocytes tend to dedifferentiate into fibroblasts when they are subcultured, which is a major problem. This protocol, involving primary cultures to limit dedifferentiation, describes two different methods for culturing chondrocytes of different anatomical origins (articular and costal chondrocytes, both of which represent hyaline cartilage) from mice. Mice are of particular interest for cellular and molecular studies, as many tools suitable for use in mice are available. In addition, rapid development of transgenic and gene-targeted mice provides powerful instruments for biological studies. The protocol can be divided into four stages: isolation of cartilage (15 min per animal), isolation of chondrocytes (2 h extended overnight), seeding of chondrocytes (1 h 30 min) and growth in culture (6 d). To obtain confluency of chondrocytes using this protocol takes 7 d. Methods for phenotyping chondrocytes are also provided.