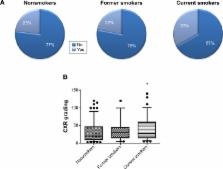 Smoking has been associated with tuberculosis (TB); however, the effects of smoking on the effectiveness of TB treatment remain unclear.

Data were retrieved from case notes and interviews of subjects registered in the TB-reporting system from 2010 to 2012. Study cases were defined as subjects with TB-positive sputum cultures, whereas the controls were defined as subjects with non-TB-related pulmonary diseases. Statistical analyses included logistic regression and multivariate Cox proportional hazard regression models.

A total of 245 cases with cultures positive for TB and 114 controls with non-TB-related pulmonary diseases and negative sputum cultures were recruited. Current smokers had the highest failure rate (33%) for TB treatment, and they had the most severe pulmonary lesions based on chest X-ray grading. Current smokers had a 1.36-fold (95% confidence interval 1.03–2.36, P<0.05) higher odds ratio for cultures positive for TB compared with nonsmokers. In subjects with TB-positive cultures, current smoking was associated with an increase in treatment days required for cultures to convert from positive to negative (hazard ratio 1.12, 95% confidence interval 1.03–1.39; P<0.05).

Longer periods of treatment may be required for TB patients who are current smokers.

Smoking and mortality from tuberculosis and other diseases in India: retrospective study of 43000 adult male deaths and 35000 controls.

Thanjavur Kanaka,  Richard Peto,  Vendhan Gajalakshmi … (2003)
In India most adult deaths involve vascular disease, pulmonary tuberculosis, or other respiratory disease, and men have smoked cigarettes or bidis (which resemble small cigarettes) for several decades. The study objective was to assess age-specific mortality from smoking among men (since few women smoke) in urban and in rural India. We did a case-control study of the smoking habits of 27000 urban and 16000 rural men who had died in the state of Tamil Nadu, southern India, from medical causes (ie, any cause other than accident, homicide, or suicide), and of 20000 urban and 15000 rural male controls. The main analyses are of mortality at ages 25-69 years. In the urban study area, the death rates from medical causes of ever smokers were double those of never smokers (standardised risk ratio at ages 25-69 years 2.1 [95% CI 2.0-2.2]). The risks were substantial both for cigarette smoking (the main urban habit) and for bidi smoking. Of this excess mortality among smokers, a third involved respiratory disease, chiefly tuberculosis (4.5 [4.0-5.0], smoking-attributed fraction 61%), a third involved vascular disease (1.8 [1.7-1.9], smoking-attributed fraction 24%), 11% involved cancer (2.1 [1.9-2.4], smoking-attributed fraction 32%), chiefly of the respiratory or upper digestive tracts, and 14% involved alcoholism or cirrhosis (3.3 [2.9-3.8], not attributed to smoking). Among ever smokers, the absolute excess mortality from tuberculosis was substantial throughout the age range 25-69 years. (A separate survey of 250000 men living in the urban study area found that ever smokers are three times as likely as never smokers to report a history of tuberculosis, corresponding to a higher rate of progression of chronic subclinical infection to clinical disease.) The proportional excesses of respiratory, vascular, and neoplastic mortality at ages 25-69 years among ever smokers in the urban study area were replicated, each with similarly narrow CI for the risk ratio, in the rural study area (where bidi smoking predominated), and are taken to be largely or wholly causal. For urban and for rural death from medical causes at older ages (> or =70 years), the standardised risk ratio was 1.3. Smoking, which increases the incidence of clinical tuberculosis, is a cause of half the male tuberculosis deaths in India, and of a quarter of all male deaths in middle age (plus smaller fractions of the deaths at other ages). At current death rates, about a quarter of cigarette or bidi smokers would be killed by tobacco at ages 25-69 years, those killed at these ages losing about 20 years of life expectancy. Overall, smoking currently causes about 700000 deaths per year in India, chiefly from respiratory or vascular disease: about 550000 men aged 25-69 years, about 110000 older men, and much smaller numbers of women (since few women smoke).

A. Rajamma,  T Frieden,  Khanichi N. Charles … (2002)
To identify risk factors associated with default, failure and death among tuberculosis patients treated in a newly implemented DOTS programme in South India. Analysis of all patients registered from May 1999 through April 2000. A community survey for active tuberculosis was underway in the area; patients identified in the community survey were also treated in this programme. In all, 676 patients were registered during the period of the study. Among new smear-positive patients (n = 295), 74% were cured, 17% defaulted, 5% died and 4% failed treatment. In multivariate analysis (n = 676), higher default rates were associated with irregular treatment (adjusted odds ratio [AOR] 4.3; 95%CI 2.5-7.4), being male (AOR 3.4; 95%CI 1.5-8.2), history of previous treatment (AOR 2.8; 95%CI 1.6-4.9), alcoholism (AOR 2.2; 95%CI 1.3-3.6), and diagnosis by community survey (AOR 2.1; 95%CI 1.2-3.6). Patients with multidrug-resistant tuberculosis (MDR-TB) were more likely to fail treatment (33% vs. 3%; P < 0.001). More than half of the patients receiving Category II treatment who remained sputum-positive after 3 or 4 months of treatment had MDR-TB, and a large proportion of these patients failed treatment. Higher death rates were independently associated with weight <35 kg (AOR 3.8; 95%CI 1.9-7.8) and history of previous treatment (AOR 3.3; 95%CI 1.5-7.0). During this first year of DOTS implementation with sub-optimal performance, high rates of default and death were responsible for low cure rates. Male patients and those with alcoholism were at increased risk of default, as were patients identified by community survey. To prevent default, directly observed treatment should be made more convenient for patients. To reduce mortality, the possible role of nutritional interventions should be explored among underweight patients.