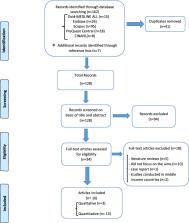 Five electronic databases were systematically searched to identify original, English language articles focussing on oral cancer risk knowledge, attitudes and practices of South Asian immigrants in developed countries. All studies that met the following inclusion criteria were included: conducted among South Asian immigrants in developed countries; explored at least one study outcome (knowledge or attitudes or practices); used either qualitative, quantitative or mixed methods. No restrictions were placed on the publication date, quality and setting of the study.

A total of 16 studies involving 4772 participants were reviewed. These studies were mainly conducted in the USA, UK, Italy and New Zealand between 1994 and 2018. Findings were categorised into themes of oral cancer knowledge, attitudes and practices. General lack of oral cancer risk knowledge (43–76%) among participants was reported. More than 50% people were found engaging in one or more oral cancer risk practices like smoking, betel quid/pan/gutka chewing. Some of the participants perceived betel quid/pan/gutka chewing habit good for their health (12–43.6%).

This review has shown that oral cancer risk practices are prevalent among South Asian immigrants who possess limited knowledge and unfavourable attitude in this area. Culturally appropriate targeted interventions and strategies are needed to raise oral cancer awareness among South Asian communities in developed countries.

The global incidence of lip, oral cavity, and pharyngeal cancers by subsite in 2012.

David Williams,  Naomi Priest,  Norman B Anderson (2016)
Race/ethnicity and socioeconomic status (SES) are social categories that capture differential exposure to conditions of life that have health consequences. Race/ethnicity and SES are linked to each other, but race matters for health even after SES is considered. This commentary considers the complex ways in which race combines with SES to affect health. There is a need for greater attention to understanding how risks and resources in the social environment are systematically patterned by race, ethnicity and SES, and how they combine to influence cardiovascular disease and other health outcomes. Future research needs to examine how the levels, timing and accumulation of institutional and interpersonal racism combine with other toxic exposures, over the life-course, to influence the onset and course of illness. There is also an urgent need for research that seeks to build the science base that will identify the multilevel interventions that are likely to enhance the health of all, even while they improve the health of disadvantaged groups more rapidly than the rest of the population so that inequities in health can be reduced and ultimately eliminated. We also need sustained research attention to identifying how to build the political support to reduce the large shortfalls in health. (PsycINFO Database Record

S Warnakulasuriya (2009)
Major risk factors for oral cancer are cigarette smoking and alcohol misuse. Among Asian populations, regular use of betel quid (with or without added tobacco) increases oral cancer risks. Dentists should be aware of some emerging risk factors for oral, and particularly oropharyngeal cancer such as the role of the human papillomavirus infection (HPV). Decreases in risk could be achieved by encouraging high fruit and vegetable consumption. Some controversies related to the aetiology of this disease also need clarification. The objective of this paper is to provide an opinion on these debated controversies.