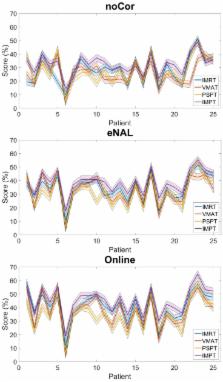 We present a methodology which can be utilized to select proton or photon radiotherapy in prostate cancer patients. Four state-of-the-art competing treatment modalities were compared (by way of an in silico trial) for a cohort of 25 prostate cancer patients, with and without correction strategies for prostate displacements. Metrics measured from clinical image guidance systems were used. Three correction strategies were investigated; no-correction, extended-no-action-limit, and online-correction. Clinical efficacy was estimated via radiobiological models incorporating robustness (how probable a given treatment plan was delivered) and stability (the consistency between the probable best and worst delivered treatments at the 95% confidence limit). The results obtained at the cohort level enabled the determination of a threshold for likely clinical benefit at the individual level. Depending on the imaging system and correction strategy; 24%, 32% and 44% of patients were identified as suitable candidates for proton therapy. For the constraints of this study: Intensity-modulated proton therapy with online-correction was on average the most effective modality. Irrespective of the imaging system, each treatment modality is similar in terms of robustness, with and without the correction strategies. Conversely, there is substantial variation in stability between the treatment modalities, which is greatly reduced by correction strategies. This study provides a ‘proof-of-concept’ methodology to enable the prospective identification of individual patients that will most likely (above a certain threshold) benefit from proton therapy.

J V Lebesque,  Mark I van Berge Henegouwen,  P Remeijer … (2000)
To provide an analytical description of the effect of random and systematic geometrical deviations on the target dose in radiotherapy and to derive margin rules. The cumulative dose distribution delivered to the clinical target volume (CTV) is expressed analytically. Geometrical deviations are separated into treatment execution (random) and treatment preparation (systematic) variations. The analysis relates each possible preparation (systematic) error to the dose distribution over the CTV and allows computation of the probability distribution of, for instance, the minimum dose delivered to the CTV. The probability distributions of the cumulative dose over a population of patients are called dose-population histograms in short. Large execution (random) variations lead to CTV underdosage for a large number of patients, while the same level of preparation (systematic) errors leads to a much larger underdosage for some of the patients. A single point on the histogram gives a simple "margin recipe." For example, to ensure a minimum dose to the CTV of 95% for 90% of the patients, a margin between CTV and planning target volume (PTV) is required of 2.5 times the total standard deviation (SD) of preparation (systematic) errors (Sigma) plus 1.64 times the total SD of execution (random) errors (sigma') combined with the penumbra width, minus 1.64 times the SD describing the penumbra width (sigma(p)). For a sigma(p) of 3.2 mm, this recipe can be simplified to 2.5 Sigma + 0.7 sigma'. Because this margin excludes rotational errors and shape deviations, it must be considered as a lower limit for safe radiotherapy. Dose-population histograms provide insight into the effects of geometrical deviations on a population of patients. Using a dose-probability based approach, simple algorithms for choosing margins were derived.

A conformation number to quantify the degree of conformality in brachytherapy and external beam irradiation: application to the prostate.

The Diagnosis and Treatment of Prostate Cancer: A Review.

Mark Litwin,  Hung-Jui Tan (2017)
Prostate cancer is the most common cancer diagnosis made in men with more than 160 000 new cases each year in the United States. Although it often has an indolent course, prostate cancer remains the third-leading cause of cancer death in men.