Phylogeny of the supertribe Nebriitae (Coleoptera, Carabidae) based on analyses of DNA sequence data 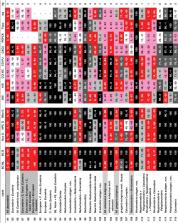