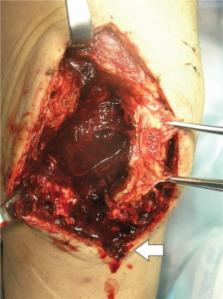 It has been recognized that perioperative hemostasis management after joint-replacement surgery for hemophilia patients is complicated and cumbersome, due to the necessity of rigorous monitoring for clotting-factor levels throughout the infusion. Between 2005 and 2014, we examined seven patients with hemophilia A (ten joints: six hips and four knees) receiving total hip or knee arthroplasty (THA or TKA) for hemophilic arthropathy. One male patient (31 years old) showed an intra-articular hematoma formation after THA (case 1). In another male patient (46 years old) receiving TKA, the postoperative trough factor VIII level became lower significantly than reference levels (80%–100% for the 5–10 postoperative days) recommended by the guidelines from the Japanese Society on Thrombosis and Hemostasis, despite sufficient coagulant based on the guidelines being administered (case 2). In the latter patient, deep infection and hematoma formation were observed postoperatively. In this article, we provide a detailed clinical report regarding these two complication cases at the early postoperative periods, and the management of bleeding control for hemophilia patients is discussed.

Comparative pharmacokinetics of plasma- and albumin-free recombinant factor VIII in children and adults: the influence of blood sampling schedule on observed age-related differences and implications for dose tailoring

S BJÖRKMAN,  V S BLANCHETTE,  K. Fischer … (2010)
Summary Background: Dose tailoring of coagulation factors requires reliably estimated and reproducible pharmacokinetics (PK) in the individual patient. Objectives: To investigate the contribution of both biological and methodological factors to the observed variability of factor VIII (FVIII) PK, with the focus on differences between children and adults, and to examine the implications for dosing. Patients: Data from 52 1–6-year-old and 100 10–65-year-old patients with hemophilia A (FVIII ≤ 2 IU dL−1) in three clinical studies were included. Results: In vivo recovery was lower, weight-adjusted clearance was higher and FVIII half-life was on average shorter in children than in adults. However, a reduced blood sampling schedule for children was estimated to account for up to one half of the total observed differences. Intrapatient variance in PK was smaller than interpatient variance in 10–65-year-olds. Age and ratio of actual to ideal weight only showed weak relationships with PK parameters. Variance in PK caused large variance in the calculated dose required to maintain a target FVIII trough level during prophylactic treatment. Conclusion: Differences in blood sampling schedules should be taken into account when results from different PK studies are compared. However, even with this consideration, PK cannot be predicted from observable patient characteristics but must be determined for the individual. Because the influence of reducing the blood sampling was minor in comparison to the true variance between patients, a reduced blood sampling protocol can be used. Low intrapatient variability supports the use of PK measurements for dose tailoring of FVIII.

Pharmacokinetics of coagulation factors: clinical relevance for patients with haemophilia.

S BJÖRKMAN,  E Berntorp (2000)
Haemophilia is a recessively inherited coagulation disorder, in which an X-chromosome mutation causes a deficiency of either coagulation factor VIII (FVIII) in haemophilia A, or factor IX (FIX) in haemophilia B. Intravenous administration of FVIII or FIX can be used to control a bleeding episode, to provide haemostasis during surgery or for long term prophylaxis of bleeding. In special cases, activated factor VII (FVIIa) may be used instead of FVIII or FIX. The aim of this work is to review the pharmacokinetics of FVIII, FIX and FVIIa and to give an outline of the use of pharmacokinetics to optimise the treatment of patients with haemophilia. The pharmacokinetics of FVIII are well characterised. The systemic clearance (CL) of FVIII is largely determined by the plasma level of von Willebrand factor (vWF), which protects FVIII from degradation. Typical average CL in patients with normal vWF levels is 3 ml/h/kg, with an apparent volume of distribution at steady state (Vss) that slightly exceeds the plasma volume of the patient, and the average elimination half-life (t1/2) is around 14 hours. There are still some discrepancies in the literature on the pharmacokinetics of FIX. The average CL of plasma-derived FIX seems to be 4 ml/h/kg, the Vss is 3 to 4 times the plasma volume and the elimination t1/2 often exceeds 30 hours. FVIIa has a much higher CL (average of 33 ml/h/kg), and a short terminal t1/2 (at 2 to 3 hours). The Vss is 2 to 3 times the plasma volume. Since the therapeutic levels of coagulation factors are well defined in most clinical situations, applied pharmacokinetics is an excellent tool to optimise therapy. Individual tailoring of administration in prophylaxis has been shown to considerably increase the cost effectiveness of the treatment. Dosage regimens for the treatment of bleeding episodes or for haemostasis during surgery are also designed using pharmacokinetic data, and the advantages of using a constant infusion instead of repeated bolus doses have been explored. The influence of antibodies (inhibitors) on the pharmacokinetics of FVIII and FIX is in part understood, and the doses of coagulation factor needed to treat a patient can tentatively be calculated from the antibody titre. In conclusion, therapeutic monitoring of coagulation factor levels and the use of clinical pharmacokinetics to aid therapy are well established in the treatment of patients with haemophilia.