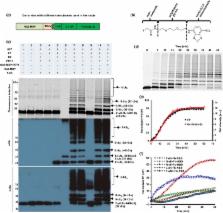 Yihong Ye,  Michael Rape (2009)
The modification of proteins with ubiquitin chains can change their localization, activity and/or stability. Although ubiquitylation requires the concerted action of ubiquitin-activating enzymes (E1s), ubiquitin-conjugating enzymes (E2s) and ubiquitin ligases (E3s), it is the E2s that have recently emerged as key mediators of chain assembly. These enzymes are able to govern the switch from ubiquitin chain initiation to elongation, regulate the processivity of chain formation and establish the topology of assembled chains, thereby determining the consequences of ubiquitylation for the modified proteins.

In vivo half-life of a protein is a function of its amino-terminal residue.

A Bachmair,  Kim Finley,  A Varshavsky (1986)
When a chimeric gene encoding a ubiquitin-beta-galactosidase fusion protein is expressed in the yeast Saccharomyces cerevisiae, ubiquitin is cleaved off the nascent fusion protein, yielding a deubiquitinated beta-galactosidase (beta gal). With one exception, this cleavage takes place regardless of the nature of the amino acid residue of beta gal at the ubiquitin-beta gal junction, thereby making it possible to expose different residues at the amino-termini of the otherwise identical beta gal proteins. The beta gal proteins thus designed have strikingly different half-lives in vivo, from more than 20 hours to less than 3 minutes, depending on the nature of the amino acid at the amino-terminus of beta gal. The set of individual amino acids can thus be ordered with respect to the half-lives that they confer on beta gal when present at its amino-terminus (the "N-end rule"). The currently known amino-terminal residues in long-lived, noncompartmentalized intracellular proteins from both prokaryotes and eukaryotes belong exclusively to the stabilizing class as predicted by the N-end rule. The function of the previously described posttranslational addition of single amino acids to protein amino-termini may also be accounted for by the N-end rule. Thus the recognition of an amino-terminal residue in a protein may mediate both the metabolic stability of the protein and the potential for regulation of its stability.

Oxygen sensing in plants is mediated by an N-end rule pathway for protein destabilization.

Beatrice Giuntoli,  Rene van der Heijden,  Pierdomenico Perata … (2011)
The majority of eukaryotic organisms rely on molecular oxygen for respiratory energy production. When the supply of oxygen is compromised, a variety of acclimation responses are activated to reduce the detrimental effects of energy depletion. Various oxygen-sensing mechanisms have been described that are thought to trigger these responses, but they each seem to be kingdom specific and no sensing mechanism has been identified in plants until now. Here we show that one branch of the ubiquitin-dependent N-end rule pathway for protein degradation, which is active in both mammals and plants, functions as an oxygen-sensing mechanism in Arabidopsis thaliana. We identified a conserved amino-terminal amino acid sequence of the ethylene response factor (ERF)-transcription factor RAP2.12 to be dedicated to an oxygen-dependent sequence of post-translational modifications, which ultimately lead to degradation of RAP2.12 under aerobic conditions. When the oxygen concentration is low-as during flooding-RAP2.12 is released from the plasma membrane and accumulates in the nucleus to activate gene expression for hypoxia acclimation. Our discovery of an oxygen-sensing mechanism opens up new possibilities for improving flooding tolerance in crops. © 2011 Macmillan Publishers Limited. All rights reserved